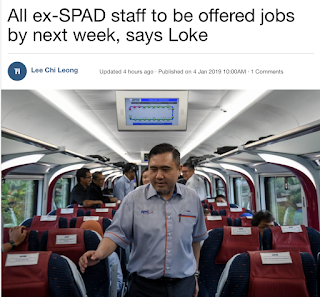 Jan 4: Good news? Well, the minister did well enough to respond immediately with his re-assurance to the 283 (now former) employees of SPAD that they will be offered jobs. How that will go, we'll have to wait and see next week. But to me this episode is yet another proof that ordinary Malaysians still need to go to the media for recourse, even in Malaysia Baharu. And we the Media still have that role to play in 2019.
Same old, same old but we're always at your service.

Written by Zaidi Azmi and Ahirul Ahirudin
KUALA LUMPUR – January 2, 2019: They were repeatedly assured that they will not be jobless after new year’s eve but today, the first working day of the year, some 283 staff of the now-defunct Land Public Transport Commission (SPAD) woke up to everything but a job.
This is because the Transport Ministry had failed to relocate all 967 of them following the agency’s decommissioning last Monday, which means that minister Anthony Loke had failed to keep his promise.
Uncertainty over the employment of the staff began when the decommissioning was announced in May 2018, soon after Pakatan Harapan won the general elections to form the federal government.
“There were married couples with SPAD and now both husbands and wives are jobless. How are they going to cope with life? Why do we have to be the sacrificial lamb in a political move,” lamented a former staff.
“January is when our children start schooling and any parent will know how much money this requires. It is sad that our welfare is not considered…. it’s almost as though we are being punished.”
While the ministry recently stated that it will assist staff to find new jobs at government-linked companies, the majority said they are disillusioned with such an assurance.
Their distrust with the ministry MOT is understandable, given that it was only two weeks ago that it told them some will not be transferred to other departments.
Those lucky enough to be re-employed are also bemoaning the fact that they have to take quite a big pay-cut.
“You have a Masters (degree) but suddenly find yourself being given a post junior to the one you held previously and with a lower salary. Is this fair?” asked one.
at January 04, 2019