AzwanBro sure knows how to rile them!

Rawang, 1 Aug: I didn't want to do another posting on Khairul Azwan Harun so soon after The latest on the Tun's hate list (26 June) but I suppose some things are too hot to resist. The Umno deputy youth leader's police report against The 3 Tan Sris proves to be such a "big issue" that A Kadir Jasin felt the PM should have responded earlier, not four days after the fact. In his posting today h e r e,  Kadir said Najib Razak's late response to AzwanBro's police report has lent credibility to a couple of conspiracy theories. Interestingly, one of the theories is that AzwanBro's report aims at making the three Tan Sris to sing like canaries (under police interrogation, that is) and, theoretically, hammers home "the final nail on Najib's coffin". 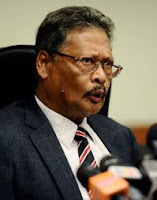 In any case, KJ's deputy is proving to one savvy operator in terms of timing his moves for maximum impact. He was not a player at all when Tun Mahathir started attacking Najib; in fact, at one time he was accused of being a Mahathir sympathiser. With two simple moves in two months, he's riled a lot of people.