Imagine that: Dr M did not aim his wrath at Najib Razak or Rosmah Mansor or Zahid Hamidi or Khairy Jamaluddin but at the 39-year old Umno deputy chief, by name!  ""(So) the country knows that when Khairul Azwan and his followers achieve power - through corruption - the country will see bribes and seizures by the government as a way to hold on to power." (Go ahead, seize PLF, Mkini)

The young man should be afraid, very afraid. But I was told that he has not lost any sleep yet.  Interesting ... 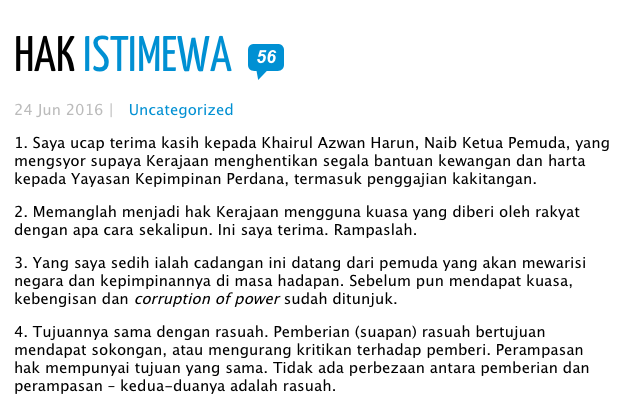 As for the sacking of Umno deputy president Muhyiddin Yassin (and former Kedah Menteri Besar Mukhriz Mahathir, to a much lesser extent), what struck me most is the fact that PM Najib Razak waited almot a year before kicking him out of the party.
Najib had dropped Muhyiddin from his Cabinet and appointed Zahid Hamidi as Deputy Prime Minister on 28 July 2015. Eleven months ago! He could have sent Abang Din packing - out of government and out of party - there and then. But he did not.

Some people saw this as a weakness, that Najib "blinked". Others call it taking one's own sweet time. "Like the cat playing with the mouse before eating it..."
I think so, too. Najib made sure he resolved (well, almost resolved) the 1MDB issue. For Tun's Save Malaysia campaign to falter. That he had won Sarawak and the two recent by-elections. He might even have waited for Brexit to conclude! It was all calculated. And so precise was the math that when it finally happened, the sacking did not shock. That it was "expected". Accepted, even. Not by Pagoh, of course. Not yet. Read Pagoh Umno vows to stand by leader


Read also, Muhyiddin's popularity has dipped from 3 months ago by Helen Ang
at June 26, 2016