The Opposition leaders - the ones who matter, at least - are still mum on Mahathir's new political party. They are well aware of the virtue for caution when dealing with the master. But their pundits and spokesmen have dutifully come out to hail the Tun's new pact as a beacon of hope. Wong Chin Huat, who once championed the Malaysian chapter of Occupy this-and-that (what happened to that campaign, anyone knows?), told disbelievers that they are wrong. Mahathir's new party will strengthen the Opposition.
He sounds genuinely relieved the former Umno President of more than two decades and his band of rebels hadn't decided to apply to join any of the existing Opposition parties  " ...as DAP is too different, Amanah is too new, while PKR would be too much of a step down for Mahathir".
Whatever little details on the new proposed party can be learned from veteran journalist The Scribe's A new party to rival Umno (July 15). Kadir, who attended the meeting to talk about the new party yesterday, says Muhyiddin Yassin, Mukhriz Mahathir and Shafie Afdal will lead the new party.
He did not mention I'm-coming-back Ibrahim Ali, the Perkasa chief, but Perkasa friends told me there won't be a new party without Tok Him.
Whoa! 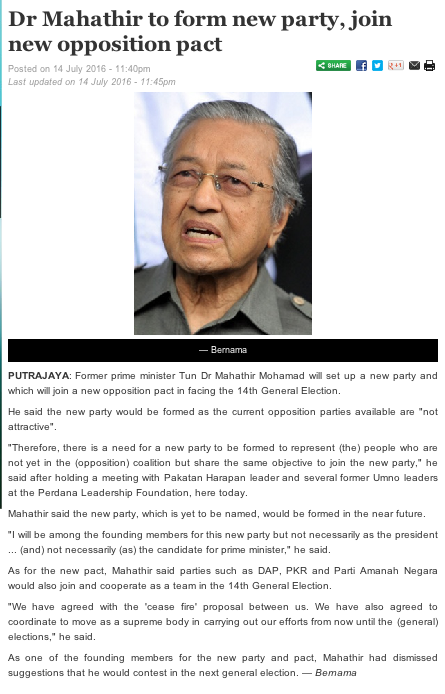 "Waa ... Mahathir forming Opposition party, ah?"
That was the first question that greeted me when I got home a while ago.
"Mmm. According to the news," said I, ready for the barrage of questions and running political commentaries that would surely follow the opener.
"Could you pass me the ketchup, please?"
That was the follow-up question?!
And then the armchair critics around my dinner table dropped the subject like poo into  a hole in the ground.. I am now left with all the space there is at the table, me and my laptop. Six months ago there would have been non-stop of follow-up questions, interrogations, suggestions and fantastic theories and conclusions.
Today, the interest has not just waned, it is hardly there anymore.
YB Rahman Dahlan is spot on when he says that "most people are not really surprised" with Dr M's announcement on his new Opposition pact made up of not-so-new faces (mostly former Umno).
"Maybe because he has been attacking BN for many years now. Or maybe because the faces we saw today at Tun's press conference are largely made of those who are widely known to have personal tiff with the current leadership."
I also agree with the Barisan Nasional Strategic Commiunications director that "the new coalition will only weaken the opposition further". In fact, I have argued in this blog about how Mahathir's moves were actually undermining the Opposition, especially DAP and PKR. [How Mahathir is helping Najib, May 17].
My first thought, upon learning of the Pakatan Tun: wouldn't Anwar Ibrahim rather die than allow the Tun to rob him of his de facto leadership of the Opposition pact that he had built from his blood, sweat and tears since 1998?
Bceause I don't see Mahathir being willing to kowtow to Anwar just so he can bring down Najib Razak and his government and party and the BN coalition!
Many people see the pact Dr M is founding as a pathetic move, perhaps even the Old Man's biggest mistake since he started his offensive against the Prime Minister and his own former party and coalition. Rahman Dahlan sees it as "dangerous liaison" of frustrated and failed politicians.
"If there is any regret to this whole episode, it is the fact that we have to fight an aging Tun whose golden years should have been spent as a statesman. Seriosuly, there is no fun not pleasure gained in fighting a nonagenarian..."

I, too, would like to wish the whole Opposition good luck. With this new pact, they would need all the luck in the world - and one big and deep hole in the ground  - for the next General Election ...