"Doomsday" blogger says he was misunderstood over 1MDB posting

Updated: Propaganda OutSyed serupa propaganda Kominis - Snapshot
For other responses towards Syed Akbar's prediction, pls scroll to the end of the Original article ...


“Idiots. What I was trying to say was that such a thing can happen and the fact that MoF is dragged into arbitration along with 1MDB is bad enough for our country’s rating and image." - Syed Akbar Ali on those who made fun of his "prediction" that the country would go bankrupt on 11 July 2016 because of 1MDB. (Malaysia Bankruptcy Day that didn't happen, The Mole). 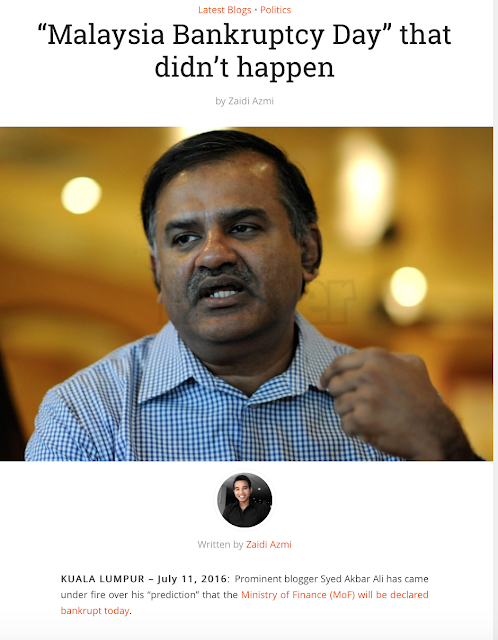 Puchong, 12 July: Syed Akbar Ali is the author of several books including Malaysia and the Club of Doom. It is safe to assume, therefore, that predicting doom and gloom is not something new or alien to him. Except that he has insisted now that he did not really predict that this country - his, yours and mine - was going bust exactly on 11 July 2016 over the 1MDB-IPIC arbitration process. [Read LSS vows to quit writing forever and ever if Syed Akbar Ali ... June 21]

What he actually wrote on his deleted-already posting, he defended himself yesterday, was "it can happen ..."

The Mole took the trouble to get Syed's side of the story in Malaysia Bankruptcy Day" that didn't happen because it's the fair thing to do. If only more people, Syed and his wannabes included, could also go a bit out of their way to establish the truth of what they are writing before publishing them, fewer people would be "misunderstood".

The 1MDB, the "reason" for our bankruptcy that wasn't, issued a statement on the 11 July event, by the way:

In a statement, it said it had submitted a "robust response" to IPIC's request for arbitration, but when asked what that meant, Group President Arul Kanda would not say on account of being bound by a confidentiality clause.

However, 1MDB maintains it is confident of its legal position.

IPIC is claiming US$6.5 billion from 1MDB, as well as the Ministry of Finance which owns 100 per cent of the debt-ridden state fund.

IPIC said it did not receive payments that 1MDB claimed to have transferred to its subsidiary Aabar Investment in British Virgin Islands and said its subsidiary is actually based in Abu Dhabi.

1MDB, on the other hand, insisted it had communicated with IPIC executives before each transfer and has documentary evidence of the payments.

As both sides have agreed to refer their dispute to the London Court of International Arbitration, the next step will be to appoint arbitrators before case management meetings begin in September.

Depending on the complexity of the case, the arbitration process may take months if not years.

According to the London Court of International Arbitration, more than 70 per cent of its past cases took more than 18 months to resolve.

Meanwhile, 1MDB reiterated that, notwithstanding the dispute with IPIC, it will continue to implement its rationalisation plan and has ample liquidity to meet its current debt obligations.

p.s. Aisey! So those who still believe that Malaysia will, or can, go bankrupt over the 1MDB arbitration process will have to defer their prediction by at least another 18 months! 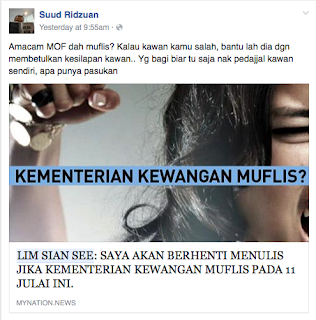 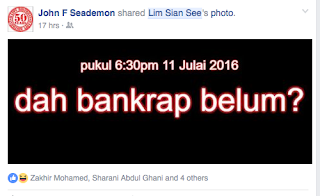