Kuala Lumpur, 7 May 2016: It rained so heavily here in the Klang Valley this afternoon but in Sarawak we witnessed a landslide at the State's 11th election [see results]. The Singapore Straits Times says the results of the election is seen as gauge of embattled PM Najib Razak's popularity. Of course it is, but what the outcome of the election really proves, in my point of view, is the maturity of people of Sarawak and the quality of Chief Minister Adnan Satem as a leader. The 72-year old Adnan, who took over long-time CM Taib Mahmud only in 2014, is a natural. He has none of the baggage that bogged down his predecessor, he is seen as clean and fair, and he doesn't mince his words when it comes to issues affecting Sarawak, from religious freedom to more royalty for oil. He had this no-nonsense approach towards anything viewed as external threat to the well-being of Sarawak, even if it emanates from other parts of Malaysia. As a result, several individuals were barred from entering the state or were evicted during the election campaign period. And they weren't all politicians from the Opposition. Adenan remains focused, calm and collected and didn't play into the hands of his more seasoned political foes. I think those guys must have thought they would have a lightweight to contend with once they succeed in forcing Taib Mahmud out. Well, they would know how wrong they had been: Adenan was the sleeping giant waiting to be awakened ....


Blaming the Voters
p.s. As the post-election comments come in,  we see how the contest for Sarawak has exposed the Opposition as a party that is stuck in the past. The DAP-PKR childish bickering over seat allocations aside, the inability to accept the voters' choice is still there ... and still despicable. Read what this chap had to say, for example: DAP blames low turnout, claims few Chinese voted BN.
And no wonder. His boss Lim Kit Sing was already accusing voters of accepting bribes offered by BN candidates even before polling had begun: BN congolomorates are wooing voters with money ...


And an analysis at Life of Annie's: 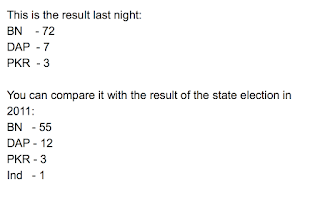 "... it's quite clear that there had been a swing to a certain extent as far as the Chinese votes were concerned. DAP suffered quite a lot while BN's Chinese-based party, namely SUPP did rather well. 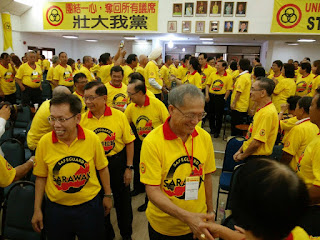 "That's for me is the biggest significance of the Sarawak election."It gives BN the signal that there's real hope of winning back the Chinese votes in other parts of the country too."