Jay cleared by Board: Bad news or good news?

His detractors, of course, will have a good laugh at the news that the CIMB board had found their own Chairman and former CEO Nazir Razak innocent of the charge that he had misused his position with regards to money in his personal account meant to be disbursed to certain politicians (do read the MalayMail Online story h e r e).

Some of the comments that I have been getting:

"As opposed to the Islamic Bank CEO who "abused" his position via a FB posting?"

"That means the BOD of CIMB condones the bank staff in distributing political funds? If so - did the Bank review who the monies were paid to? Was there audit of all Nazirs transactions?"

"Why not an independent enquiry but an internal, you can't investigate yourself ? Why not call MACC to do the investigations?"

"Seems to appear like a conduit to clear name - very much like the DAP clearing LGE over his bungalow purchase before MACC starts investigation!"


I am sure Nazir's supporters will agree 100 per cent with the CIMB's Board. I hope they will share some of their views with me ...

In any case, in a very related development, the Bank Negara is said to be looking at New banking rules to ensure that a former chief executive of a bank will never again be table to take over as Chairman of the bank's Board. 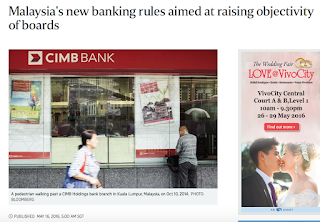