Encik Banker from Rio days, Templeton's Mabius and why 1MDB is not working for Najib's detractors 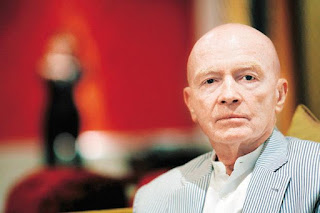 TTDI, 12 May: Had a drink last night with a banker whom I met in Rio during the World Cup. Not one as privileged as Nazir Razak (oh, we did speak about him fleetingly) but as frank and honest, if not even more, and not as detached for sure. "Things are in slow motion these days," he said, referring to the economy - his own and in general (mine, for sure!). A client had just cancelled what would have been a pretty deal for him, citing ambiguous excuses. But Encik Banker was philosophical and remained optimistic. "That's what business can be like, even in the best of times."

What's needed - and what he's looking forward to - is a clearer direction from "above". An impetus everybody needs to kickstart whatever they are doing into quicker motion. 1MDB is not an issue anymore. "We accept there were flaws but please get on with it: address those weaknesses, punish whoever the culprits might be, and close the book so everybody else can move on." Instead, we are allowing politicians - or people with political motives - to continue using 1MDB as a hammer to knock around ONE MAN. "Their political games are hurting everything else. It's not funny anymore."

Encik Banker said we were lucky that the Prime Minister has been responding to the attacks the way he has. Calm. Collected. Calculating. "Most people would have lost their composure and jumped under that kind of pressure and siege. And that would have had a disastrous effect on everything. It would have wrecked confidence."

Encik Banker must have read PM Najib Razak's "I can't be daunted" interview on Tuesday:

Sharing his secret of being so composed, Najib, who is also Umno president, said: "As a leader, I cannot be daunted."
He said he was aware that every leader or individual could not escape from being tested by Allah, no matter in whatever way.
In fact, Najib said, the challenges he faced now were not as major as those during the time of former prime ministers like Tun Abdul Razak and Tun Dr Mahathir Mohamad.
"During his time, Tun Razak faced the test of the May 13 incident while Dr Mahathir was confronted with even more challenges when Umno was declared illegal, the devastating financial crisis with many going bankrupt and the problem of (Datuk Seri) Anwar Ibrahim," he said in an interview at his office in conjunction with the 70th anniversary of Umno.
The interview was conducted by Prof Dr Azizul Halim Yahya, dean of the Faculty of Communication and Media Studies, Universiti Teknologi Mara.
"In my time, the issues are actually not so big but due to the social media and parties using the foreign media, it brought on a little more pressure," said Najib.
According to Najib, the issues faced by him were unlike the Asian financial crisis at one time or when Umno was declared illegal because the country's economic and political fundemantals were still strong.
"It is just a perception, as people in the west say the noise level is slightly louder due to the roles played by the social media and foreign press," he said.

But are our political and economic fundamentals really that solid as Najib insists?

Mr Banker said yes, certainly, but I shall not take his word for it. I'll let Mark Mobius, the exec chairman of Templeton, do the analysis here. Mobius' views would be more acceptable especially since "our" detractors and their politicians - or those people with political agenda - really would rather believe foreigners and their reports these days: 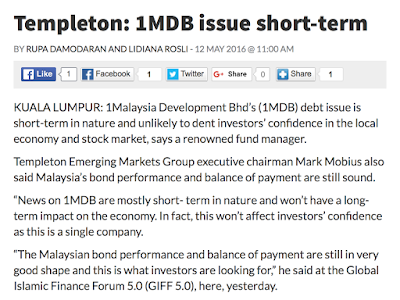 You can read what else the Templeton boss has to say h e r e.