Proton after Mahathir (Will Nazir quit, too, now?)

Mahathir quits, WSJ admits mistake by Bujai
Bujai is a seasoned journo, so mashing the two big stories of the day into one is kind of routine for him. Makes good reading. But truth be told, Dr Mahathir Mohamad's resignation didn't exactly come as a surprise. And it was just a matter of time before the WSJ's boo-boo would be exposed.

1. Mahathir
In his posting last Friday (25 March), Blogger Big Dog, a huge ally of the former Prime Minister until they abandoned him, had alluded to the problems facing Proton with Mahathir, bent on toppling the Prime Minister of the country by hook or by crook, as Chairman. Big Dog, a keen supporter of the national car, pleaded with Dr Mahathir to resign.

He should seriously consider sparing Proton, for the sake of the Group, its brand, loyalty, dedication and lively of the people within the Group. - The Premonition of the Two Pees, Big Dog, 25 March

In my own piece The Proton Dilemma (10 March), I mentioned a rumbling in the national car company: "Things have not been looking up for a while in Proton. As it is, there are quite a few in Proton who blame Dr Mahathir for the company's woes."

They won't go on record, but quite a few of the Proton people are sighing, relieved. They love the Old Man, of course, he founded the Company. But things were no longer tenable as they were. Now, at least, they have a fair chance to operate as a private entity should.

2. WSJ
The Wall Street Journal can apologise to Najib Razak with the hope that the Malaysian PM will drop a lawsuit that he can make against the newspaper, but I don't think the WSJ will say sorry (at least not at this juncture) and I don't think Najib will drop the lawsuit even if the WSJ kisses both his hands. The PM will wait for all the investigations into 1MDB and the RM2.6 billion donation to complete. He has time on his side. The longer he waits, the more truth comes out. And the wiser we, the people who have been judging him, become.

We didn't know, for example, that his youngest brother, the moderate and righteous banker Nazir Razak, received money in his account, too ... 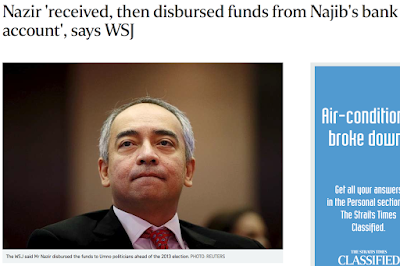 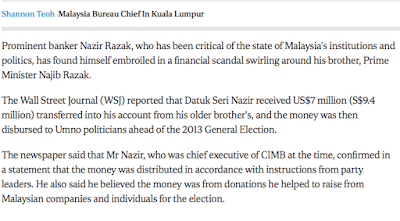 "As CEO of a major bank, I wouldn't do it, because now you are tarnished." - Top finance executive familiar with political funding, speaking to Singapore's The Straits Times about Nazir's involvement ... h e r e.