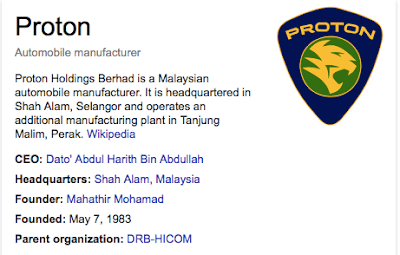 "The 64 million ringgit question is, will the Government still support Proton now?" asks a motoring journalist on Facebook after Dr Mahathir initiated and signed the Citizens Declaration that calls on PM Najib Razak to resign.


Lorong Maarof, 10 March 2016:
There are 12,000 Malaysians employed by Proton. Apart from being the Founder, Tun Dr Mahahtir Mohamad is also Chairman of Proton. No, not Executive Chairman, for the Tun doesn't need fancy titles to execute anything (or anybody). His every wish is Harith's command. I'm sure even Syed Faisal Albar, the spanking new big boss of DRB-Hicom, is not going to get in the way of the Old Man where Proton is concerned. No point in making the same mistake TS Khamil Jamil once did.

When Dr M took the chairmanship of Proton from Khamil back in May 2014, I told some people that I thought he shouldn't have. It could hold back the company. Even some people in Proton agree with me these days. Some, not all. Especially after the Citizens Declaration shocker last week involving Tun Mahathir and Lim Kit Siang, Azmin Ali, S. Ambiga, Mat Sabu, Zaman Khan, Ku Li, etc.

I am not the only one wondering how many of the 12,000 Proton employees have signed or will sign their Founder and Chairman's so-called Citizens' Declaration. And how many won't.

Proton is now a private company, after it was taken over by Syed Mokhtar AlBukhary's DRB-Hicom group, but its very existence still depends on government assistance, as has been the case since its inception. In fact, it is widely believed that Proton - or, rather, Najib Razak's reluctance to pour in more money into it as demanded by Dr M - is one of the reasons why the Tun is bent on getting rid of the son of Tun Razak for good. Things have not been looking up for a while in Proton. As it is, there are quite a few in Proton who blme Dr Mahathir for the company's woes.