A year ago today, they confidently predicted that he would be thrown out of office before the first quarter. The Opposition ganged up with his enemies within the party, and later from his own Cabinet, to take him down. The Wall Street Journal joined hands with London-based rogue portal Sarawak Report to demonize him and discredit his Administration. They called him thief and murderer, pink lips and other names, ridiculed his wife, step son and daughter, attacked his aides and supporters, and got the FBI, Scotland Yard, World Bank, Interpol, Transparency International and what have you to arrest him and throw him in jail or in exile.

Against such a backdrop for 2015, not to mention the calamaties (carried forward by the MH and AA crashes, the Mt Kinabalu/Sabah quake, the big floods, JJ's untimely demise) and economic uncertainties (ringgit, oil prices, terrorism), Najib Razak kept his cool, maintained the country's economic health and people's wellbeing, raised our internaitonal and regional profiles, and stayed on as PM of Malaysia when even some of his aides had thought he would buckle.

The dark clouds have not totally left him but the man has delivered his most daring promise on the very last day of 2015: an end to 1MDB's debt woes via his rationalisation plan in just six months. When he told me this during a meeting in May, I must confess that I had thought it was so far-fetched. Guess the man knew what he was doing all along. 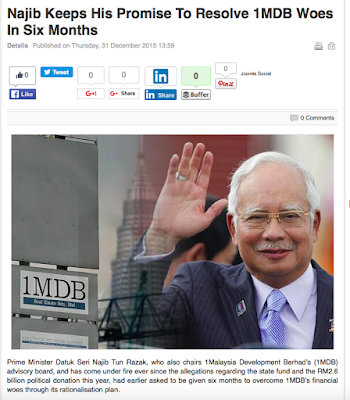 I don't know about you or Bujai [Zahid: Man of the Year], but in my book nobody comes close to Najib Razak for my own Malaysian of the Year 2015 award.

Tun Dr Mahathir Mohamad would have won it hands down if he had managed to get Najib to quit. But he didn't. Arul Kanda, the 1MDB boss, was my other choice for Malaysian of the Year. Arul had totally transformed not just the 1MDB's fortunes but the way the Fund handled its critics and detractors from the first day he took over.