"Building a successful country requires continuous effort and a clear direction. Destroying a country only requires a short time, but the consequences will be prolonged." - Najib Razak

Najib Razak, Prime Minister of Malaysia, has been called all sorts of names. By his foes he's been accused of murder and black magic, and behind his back some of the more ambitious from his own party badmouthed him as weak and soft. They said he gave in too much to the demands of the Chinese, the civil rights movements, the Christians, the Americans, the Malays, the Bumis, the Muslims, the Indians, foreigners, so on and so forth.

Despite all these, Najib has continued with his policies aimed at helping the less privileged Malaysians and at being fair to all regardless of race and religion. Many of his own ministers and officials have let him down again and again but he has continued to engage as many groups of Malaysians as possible in the spirit of his trademark "inclusiveness". His 1Malaysia slogan is no longer just a slogan but a theme that can seriously re-unite a divided Malaysian people and transform their nation. He still could not bring together the two PMs before him but both Dr Mahathir Mohamad and Abdullah Ahmad Badawi are solidly behind him now. Even chief foe Anwar Ibrahim had to admit, grudgingly, that Najib could prove a formidable opponent in the coming general election. 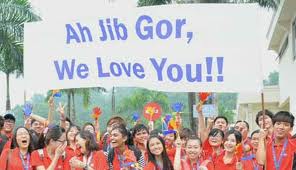 You are allowed to disagree with me but for sheer consistency, hard work, and determination to promote harmony and stability among the various ethnics in this beloved Land, PM Ah Jib Gor or Jibby or Pink Lips [or whatever name you are calling him] has done enough to be, in my books, the Malaysian of the Year for 2012.

If you have your own Malaysian of the Year, feel free to name names in my comment box ..

Happy New Year, my dear Readers, may 13 be a lucky year for you. Amin.