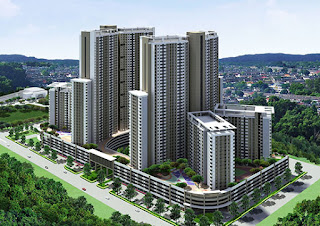 The 1MDB issue is as good as dead. I mean, the idea of using 1MDB and the lost RM42 billion to bring down Najib Razak as Prime Minister has clearly failed. Just read the latest edition of The Edge, which is owned by Tong Kooi Ong, the man who has no love whatsoever for 1MDB. The business weekly's cover story on Edra, the plus-minus RM18 billion energy giant that China's CGN Power Group bought from 1MDB just three weeks ago, confirms what most of us suspected all along - that Edra was indeed a gold mine that 1MDB had never been given the chance to work on. Say what you like about how flawed the business model of the 1MDB might have been: the point is, the scandals manufactured from it are no longer good enough to bring down a PM.

So now some merajuk bloggers are aiming their guns on PR1MA, in the hope that people will believe that what Najib Razak is trying to do, really, is to steal money from the rakyat and not to build them homes.
Same shit these people have been trying to sell, to no avail, with 1MDB.
This time, though, they are getting some help from an incredibly obscure Italian property consultant who somehow thinks he can come into this country and declare a massive socio-economic project like PR1MA a "total failure" three years after its inception.
This Mario says "the government is not happy (with PR1MA), the developers are not happy, the market is not happy".
And guess who is happy that this Mario is shooting his mouth like he'd had too much grappa? People who stand to lose out from the PR1MA initiative, of course. Plus one or two merajuk bloggers and, - this one I can't explain - the publisher of a local property magazine!

Fuyooh!
All of these agents and consultants call one another "property guru" so no surprise there why some of our Malaysians are so ready to swallow every word they say.

For the record, PR1MA has obtained government approval for 230,000 affordable homes and is poised to achieve the target of 240,000 homes for the three years since PR1MA's inception. A total of 190 projects nationwide are underway, simultaneously, to deliver these homes.
Many of the "usual suspects" in the well-guarded cartel know as our housing industry will not get to earn a single sen out of this initiative by the Najib Administration simply because PR1MA sells its homes direct to home buyers, thus obliterating the role of speculators, middlemen, property agents, consultants, maybe even magazine publishers, and other bloodsuckers.
PR1MA was meant to do away with these elements in the first place, anyway. Otherwise, how could the government afford to build affordable homes and, as one of the experts below put it, "take care of social welfare"? The housing developers that we have - at least most of them - aren't going to do that, not in a thousand years!


KUALA LUMPUR, Dec 14 — Government-owned PR1MA Corporation Malaysia (PR1MA) has failed in its mission to provide affordable housing in the right locations, property consultant Dr Daniele Gambero alleged today.
Daniele, CEO of consultancy group REI Group of Companies, said the Perumahan Rakyat 1Malaysia (PR1MA) initiative started as a good idea but the company running the programme has not been meeting the government’s set targets.
“PR1MA is a total failure. It is not delivering homes at the right value in the right place.
“The government is not happy about it, developers are not happy about it, the market is not happy about it.
“It’s not to be laughed about or joked about unfortunately,” he said during a question-and-answer session at PropertyGuru’s Property Market Outlook 2016 forum today.
He questioned Putrajaya’s promise of churning out thousands of PR1MA units, highlighting that even all the developers in Malaysia combined would only be able deliver less than 160,000 units per year.
Property magazine publisher KK Chua, who was also a panellist at the forum, said the government has only approved 72 PR1MA projects that can deliver 50,000 units, a mere 10 per cent of Putrajaya’s target of 500,000 units by 2020.
“Of course, out of the 50,000, none has been delivered, we don’t know when it will be delivered. We can forget about the pricing, the location of the projects is a bit far-flung,” the managing director of Property Insight’s publisher Armani Media said.
Andaman Property Management managing director Datuk Dr Vincent Tiew said, however, that there are PR1MA units being built in prime locations but noted that the firm has failed to create public awareness on its project locations.
He also said that PR1MA has changed the nature of its joint venture with private developers as it has begun to see the increasing difficulty in obtaining funds to buy land and build affordable housing units.
Siva Shanker, CEO of property agency PPC International, said the presence of too many government agencies overseeing different aspects of affordable housing was hampering Putrajaya’s success, noting that no one has been able to even agree on the price range of “affordable” housing.
“We need to define that first and then we need to put all these agencies under one agency that will drive this and I believe the way to do this is not to blackmail or twist the arm of developers,” the panellist said.
Private developers should not be forced to do social responsibility work or be asked to partner the government in doing so, as it would not generate good results, he added.
“If the government seriously believes that is a problem, then the problem needs to be tackled by the government, leave the developer to do his job and let the government take care of social welfare,” he said.
Under the Budget 2016, the government said it intends to allocate RM1.6 billion for PR1MA to build 175,000 houses with a total of 10,000 units expected to be completed by next year.
Among the list of measures for housing for Malaysians of various incomes, Putrajaya said SPNB will have RM200 million to build 10,000 units of Rumah Mesra Rakyat with a RM20,000 subsidy each, while KPKT will be given RM863 million to build 22,300 units of apartments and 9,800 units of terrace houses under the People’s Housing Programme (PPR).
at December 16, 2015