"... any time, when a government bill or government motion is defeated, particularly when on a substantive issue, then it would tantamount to a no confidence motion!" - Lim Kit Siang, All Eyes on Parliament: Everyone asking, confidence or not? 23 June 2008

This no-confidence vote against the Prime Minister and the Government of the day is a game often played, maybe too often. Lim KIt Siang & Co has been playing it over and over again. In fact, back when Abdullah Ahmad Badawi's fall was imminent in the hands of repeat rebel king Tun Dr Mahathir Mohamad, Kit Siang even initiated a move to table a motion of Vote of Confidence for Pak Lah in Parliament! Yes, vote of confidence, just to spite Dr Mahathir and Umno!
For the years of experience in playing such games, you'd think they'd be good at it by now. No, the Opposition led (effectively) by Kit Siang are as incompetent as ever! They couldn't even decide who should table the motion this time! (Wan Azizah to table new motion of no-confidence, Awani, 19 Oct)
But bungle or not, the impact of their game is great.
One of the consequences of their action:

The Opposition know and everybody knows that the no-confidence vote is most unlikely to work. They don't have the numbers and, look, they can't (or won't) even come up with the simple Anti-Najib List that the Parliament Speaker Pandikar Amin had asked them to. 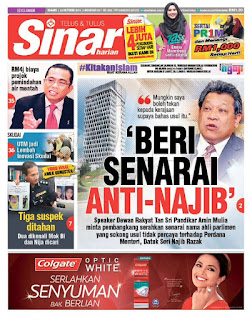 So what do they do now?
As Kit Siang suggested in 2008, defeat a government bill or motion on a substantive issue for that will be tantamount to a no-confidence vote against Najib and the Governmnet.
And what can be more substantive thatn the Budget 2016!?

“Bersih 2.0 urges both Pakatan Harapan and PAS to instruct all of their parliamentarians to attend the Parliament during the budget debate and vote against the budget in every opportunity.
“Bersih 2.0 also urges all Barisan Nasional backbenchers to cross the floor and vote down the budget. At the very least, all BN parliamentarians should abstain from voting in favour of the budget,” it said in a statement.

I don't really care if they want to table a motion of no-confidence against Najib or a motion of confidence for Muhyiddin Yassin or anyone else they think should be their Prime Minister of Choice. But the intenion of blocking the Budget 2016 is malicious, even dangerous. It is tantamount to not just economic sabotage but it will seriously underine the well-being of the people these politicians are supposed to represent.
PM Najib Razak tables Budget 2016 - one of the hardest budgets to table - tomorrow.