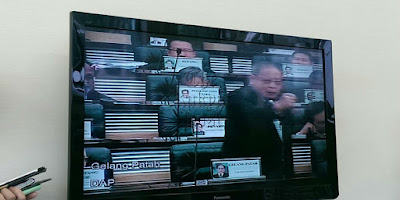 “I am sad that MPs don’t realise how shallow they are, how ignorant they are. People are chocking, struggling with rising costs, charges for sedition 1MDB, typhoid, and the Speaker is more interested in suspending the MP of Gelang Patah." - Lim Kit Siang

WHY was Kit Siang suspended?
Because he won't apologize for calling the Speaker of the Dewan Rakyat a dictator.

Well, I am sad too. Not because Kit Siang was suspended but because he could have easily avoided it. Because of his refusal to apologise. Name calling is shallow. Anybody can call you, me or the Speaker names but it takes a real man (and woman) to say sorry afterwards.
Yessir, people are chocking, struggling with rising costs, charges for sedition, 1MDB, typhoid but the DAP strongman is more interested in making selfish political statements, saving his own face, and then blamed other MPs for not bailing him out.
That's why I'm sad.


p.s. If there's a Vote of NO Confidence against Najib Razak, that's more or less how the voting is going to look like, you reckon?