The day they shot the Deputy

"17 years ago last night, Umno sacked its Deputy President Anwar Ibrahim. There was some exodus here and there but the party remained almost intact. Before that, the last time Umno saw a boardroom tussle was 11 years earlier, in 1987. Deputy Preisdent Musa Hitam had teamed up with Tengku Razaleigh Hamzah against Dr Mahathir and Ghafar Baba. The President and Ghafar won by a very marginal majority. The 1987 tussle ripped the party into two but the Malays remained united. Today?" - a Whatsapp message from a dear friend this morning 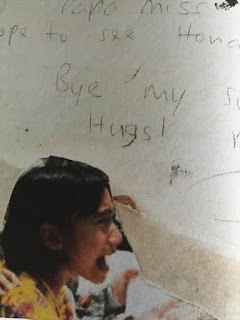 Ah, Nurul Hana! Yesterday, same dear friend saw me with a copy of Sayang Buat Papa, a scrapbook-diary by Nurul Hana, Anwar's youngest daughter (106 pages, 2015, Gerakbudaya Express, available at Borders). Hana, now 23, was just six years old in 1998 when her father was arrested by Dr Mahathir Mohamad. I remember the events that led to Anwar's sacking as DPM and Deputy President of Umno, I recall the events that followed his Gestapos-style arrest. I might even have spotted Nurul Hana at a press conference in Anwar's home in Bukit Damansara, before they took her papa away.

Let me be clear about one thing: I'm no fan of Anwar or his wife Azizah, or Nurul Izzah their Lembah Pantai MP daughter. Nurul Hana's book is not going to turn me into one, for sure. But what it does is it makes me reflect on those days, and the eternal political warfares that has marked our shared history and, I believe, also stalled our progress as a nation many many times in the last three decades.

As I see it, all the Umno politicians involved - Anwar included - have emerged winners. The difference is, some ended up with bigger loot than others.

The real losers are the Malays.

And they continue to lose till this day.

For today, Mahathir, who features prominently in Nurul Hana's book, is still starring in the latest political drama, doing everything to unseat the PM and Umno president Najib Razak, who has sacked his deputy PM, just like Mahathir had sacked Anwar Ibrahim 17 years ago. Umno, the party of the Malays, is reeling. The rumours that Muhyiddin Yassin will be sacked as Deputy President by Umno has been quashed by Hishammuddin Hussein.

... But I remember how both Anwar and Mahathir were dismissing rumours of a rift, right before the cracks gave way to the gaping abyss.