Be scared, be very scared, Justo to tell "the real story" 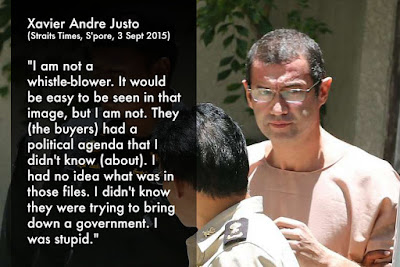 Well, they cheated him of US$2 million (and this before the dollar climbed dramatically against the Ringgit and the Baht!) and he's staring at the prospect of three years behind Thai bars, so you'd understand if he's mighty pissed off.

Well, don't expect me to be sympathetic, but bring it on, Andre!

Xavier Andre Justo, the Swiss national held in a Bangkok jail on a blackmail conviction - and embroiled in a financial scandal involving Malaysian politics - plans to appeal against his three-year jail term, he told The Straits Times.
"I wasn't expecting three years," he said. Justo was sentenced on Aug 17, but had expected his cooperation with police and a full confession to draw a lighter sentence.
He has until Sept 17 to file an appeal. In the interim, he is looking for a new Thai lawyer, he said from Bangkok's Klong Prem remand prison, where he is serving his sentence. His Swiss lawyer Marc Henzelin was present at the interview.
Asked if the details of his confession - and the transcript of a WhatsApp chat he had with the group that made an offer to buy his stolen data in a deal struck in Singapore - had been given to the Malaysian police, he said: "I have no idea."
He had not been contacted by anyone from Malaysia, he said.
He lashed out at references to him as a "whistle-blower" who sold data he stole from his former employer PetroSaudi, which contained details of a deal between the Saudi energy firm and Malaysia's troubled state investment firm 1MDB. Malaysian Prime Minister Najib Razak heads 1MDB's advisory board.
"I am not a whistle-blower," Justo said. "It would be easy to be seen in that image, but I am not. They (the buyers) had a political agenda that I didn't know (about). I had no idea what was in those files. I didn't know they were trying to bring down a government. I was stupid," he claimed.
Justo, who had quit PetroSaudi in 2011, demanded 2.5 million Swiss francs (S$3.7 million) from PetroSaudi's chief executive in 2013 for not divulging information he held on the company. The firm had paid him off once before and refused to pay him again, instead filing a complaint with the Thai police in May this year. In June, he was arrested at his plush home on the Thai resort island of Koh Samui.
In an exclusive interview with The Straits Times on July 23 while in remand, Justo revealed that he was promised US$2 million (S$2.8 million)  - which he was never paid - for the stolen data by Malaysian businessman Tong Kooi Ong, owner of The Edge Media Group.
He claimed those he met over the negotiations, including Sarawak Report editor Clare Rewcastle- Brown, had talked about using the data "to try to bring down the Malaysian government" and had talked of plans to "modify" the data.
The day the revelations were published, Mr Tong in a joint statement with The Edge Group publisher Ho Kay Tat acknowledged that they had misled Justo into believing he would be paid. "That was the only way to get hold of the evidence to expose how a small group of Malaysians and foreigners cheated the people of Malaysia of US$1.83 billion," they said, denying that they modified any data.
On Tuesday, Justo, barefoot and in prison-issue dark blue shorts and light blue cotton shirt, said he was being treated "better than expected" in prison. "I eat three meals a day. I shower twice a day. Everyone, from the inmates to the officers, has been nice," he said.
Apart from The Straits Times, he has spoken separately to at least two European news outlets. "I want people to know the real story, not just anything and everything written about me," he told The Straits Times.