From RM42 billion to RM42 million

Under Swiss law, authorities say they are looking into "unknown persons" when they are unsure about who was involved. - Swiss 1MDB probe targets two execs and unknowns persons

Now the Swiss knives are out for 1MDB! We are all against Malaysians running to foreign powers to help deal with our own problems, badmouthing their own country in the process. But the case of our hero Khairuddin Abu Hassan taking the 1MDB issue to the Swiss authorities, just like when Hindraf took the discrimination against Malaysian Hindus' case to Her Majesty the Queen of England, may actually be a blessing in disguise for all os us.

Maybe the Swiss will be able to shed light on the matter, which has been muddled further by fresh allegations and new developments. Latest is by the Sarawak Report that RM42 million of money from KWAP, the retirement fund, had gone to PM Najib Razak's personal account(s).

RM42 million (see links at the end of posting)? Typo, kot. or that was my first thought, because all along the story was Najib had stolen RM42 billion - not million - from 1MDB!

In any case, that's how far the 1MDB has been derailed. Good news is Arul Kanda and Co didn't hesitate to say h e r e they are happy to help. I hope the Swiss get in touch with them without hesitation, for the goalposts will surely shift again  ... 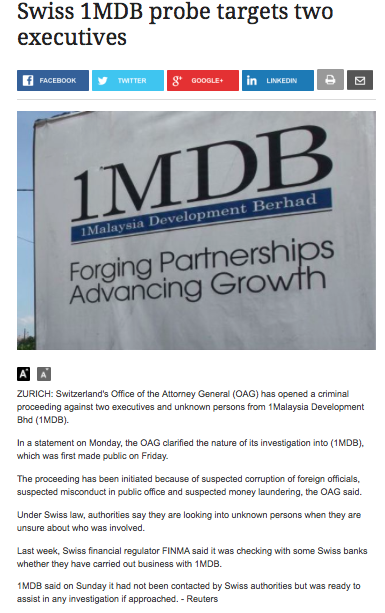