"We are facing the triple threat of economic, political and - still remote but possibly - security [offensives]."

Got this in my message box this morning. If that's the case, I was thinking, we will be banking on extraordinary men to help us weather the overwhelming challenges.

I hear AWO, the banker-turned-Minister in the Prime Minister's Department, will set up and head a think tank to help us deal with the extraordinary challenges facing the nation in the face of the world's current currency, primary commodity and stock market fears. Details are sketchy but it looks like PM Najib Razak has decided to adopt some lessons from the 1997/98 currency crisis when the National Economic Advisory Council was formed to help restore confidence, both the investors and the public's, and formulate measures to deal with the free-falling ringgit back then. Tun Daim Zainuddin had featured prominently at first when the NEAC was formed on 7 Jan 1998 but the man who had Tun Dr Mahathir's complete trust as time went by was AWO's predecessor at PMO,  Nor Mohamed Yakcop. NMY, now 68, was largely credited to be the man behind Dr M's IMF-defying capital controls that bascially got us out of the crisis relatively unscathed. AWO has a good working relationship with the man they called the Top Cat. 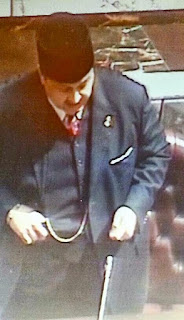 Described by a prominent blogger as "one brave soul in the Johor State Assembly", the 52-year old TPJ's latest FB/blog entry as highlighted by Malaysiakini yesterday Umno rep: TMJ's warning must apply to Johor tycoons  has captured many people's imagination, especially in the face of an increasingly chatty prince from Johor. People who didn't know better would be forgiven if they thought this Kempas assemblyman was against the Palace. If you read his entire posting yesterday [Leave The Palace Out of Politics - The Patriot], it it clear that his allegiance is with the Royalty. But if you read the TPJ's posting as a subtle message to his beloved Sultan and the TMJ to Leave Politics -and Business - Out of the Palace", you wouldn't be wrong, either.

We highly respect the stand taken by HRH the Crown Prince of Johor and the caution to those who seek to "become friends or be close with HRH The Sultan" for personal gains or political capital.


As we are in no position whatsoever to speak on HRH's behalf, we hope that HRH's caution applies not only to the politicians but also to the unscrupulous businessmen with the intent of "printing money" in fast track motion in this robust and fast developing economy of the Great State of Johor, who do not observe the sensitivities and the wellbeing of the Rakyat, namely the Malays.


It is primarily the Malays, who are for now, the most loyal of subjects to the Royal Palace; based on our observation of the actions of non-Malay shop operators and factories, who during the recent Coronation, remained operating despite it being a public holiday and the Chinese dailies prefering news of the death of Lee Kuan Yew over our Sultan's Coronation on their front pages, just to name a few.

The Inspector-general of Police has said that Bersih 4's main aim is to topple the Government so people will be watching with great interest how Khalid, 59, will deal with the alleged topplers. In the past, the police have used force, sometimes unnecessarily, on Bersih demonstrators. Likewise, the demonstrators have also shown their not-so-bersih tendency for violence and running amok. This will be Khalid's first Bersih as IGP, and as IGP he will be responsible either way (police and demonstrators' violence) when the topplers-to-be take to the streets of KL, KK and Kuching this weekend.