92.48 reasons why TH should beg to differ with PM Najib over TRX land deal

92.48 is the percentage of people in an online poll who voted in favour of Tabung Haji keeping the Tun Razak Exchange (TRX) land it bought from 1MDB.

Staggering, but hardly surprising. Yes, when the deal was publicised and politicised last month, some quarters manufactured  such a ruckus that PM Najib Razak was compelled to ask the management of Tabung Haji to let go of the property to appease the protestors. But you had a feeling all along that it was a clever conspiracy against anything related to 1MDB.

Turns out now that in every ten people polled in Capt Rahmat bin ex-IGP Tun Haniff's survey (over 3,000 people took part, three times more than Merdeka Centre's normal sample), only half a man (or half a woman) is actually against the deal; the other 9-and-a-half want TH to keep the land.

What does it mean? It can mean two things: 1. A few can make a helluva ruckus (hence, the term "silent majority") 2. The silent majority are not stupid or easily swayed by the few

In TH-TRX's case, most right thinking people ask themselves pertinent questions and eventually get answers. You can do the same: If it was bailout, why would Indonesia's Mulia Group pay nearly 20 per cent more than what Tabung Haji paid for a similar plot of land? Why are Chinese and Japanese investors queuing up also? Property developer shrugs off 1MDB controversies, considers investment in TRX [The Mole, 26/5] and Political perception not factor for potential 1MDB investors.

More importantly, if Tabung Haji is allowed to sell the land (for a hefty halal profit, no doubt), what's left for Malaysians in TRX? Takkanlah semuanya menjadi hak milik asing?

I'm not the only one who's in favour of Tabung Haji keeping the TRX land. Excerpts from a CEO blogger's posting: 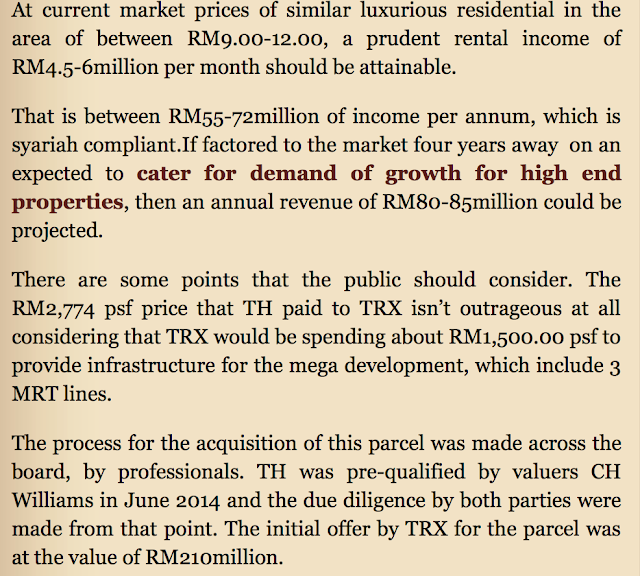