Just a week after Anifah Aman ticked off John Baird over his unsolicited comments regarding the Malaysia's decision to keep the Sedition Act, the Canadian Foreign Minister quits! That is good news for bilateral relations, if nothing else. The Barking Magpie, who wrote the other day about how Canada itself is empowering itself with legal instruments to beat all manners of extremists (just like Malaysia's doing re Sedition Act), has details about John Baird's personal and political life in An Openly Gay Canada Foreign Minister John Baird resigned


Our stand against Baird last week: 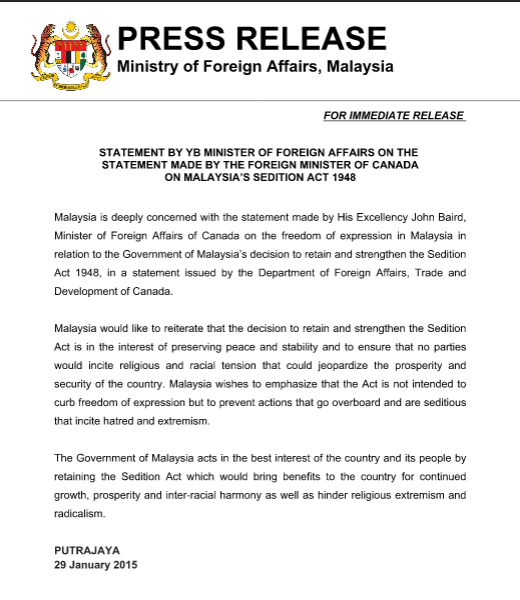 If only some of our prime ministers, ministers and politicians had the same integrity and resigned when caught openly lying about making racist and false statements accusations with absolutely no proof to back them up!

Dpp
we are all of 1 Race, the Human Race

How do you link the two? Baird's resignation had nothing to do with Anifah's rebuke....
Besides after whats happening in the last week this is not exactly significant news for Malaysia....

"Anifah Aman is not only the best Foreign Minister of all time, but should be our next PM as well."

(Hey, you were right, bro, it's not that hard! So, same payment arrangements, yeah? RM40 million in an unmarked brown suitcase, I collect it at Sabah customs? Thanks bro : )

From day one many, if not most, are in favour of retaining Sedition Act but as I say it must not be used selectively. Just look at this Umno schmuck he is allowed to take his time to give his statement to the police. And at the end I will tell you now the entire scenario will be ' no further action'.
The ass licking MCA lackeys is now trying to put up a front of how tenacious they are now on getting him to apologise for what he has said. All this is only an act or a show because at the end there is nothing, I repeat nothing MCA can do when he is just as tenacious not to apologise.
The MCA lackeys will, at all cost, want to keep the ministerial positions that the lackeys are holding. Which is the main reason why they have reversed the decision not for any MCA members to hold any posts in the government.
Now that they are holding the posts nothing will take them away from that. Bet you a thousand dollars this will be the end results !

No play play with Malaysia .
I'm all Anifah .
PN

Then all DAP officials and members have to resign..these are extremely anti malay and racist people

The truth is on the writing on the wall and all UMNO running dogs cannot deny so don't waste time castigating DAP that has fought for a free and clean Malaysia !
You spit on your own face !