2015: WIll you stand behind your Prime Minister? 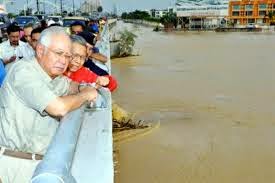 " I am positive that things will be looking up, especially for the average Jo. I am confident that this government and this Prime Minister will not let things fall apart, that we as a nation will prevail."

Kuala Lumpur, Jan 1: If my Facebook greetings for 2015 had sounded too optimistic, I think that's because some of us are being overly pessimistic of prospects during the New Year. Yes, 2014 was one of the most trying years for this young nation but it's how we learn from these lessons in life that will determine where we go from here. Make no mistake: 2015 will be a very tough year. When the going gets tough, you don't break up -- you unite. Let's not stand behind Najib Razak because it's the convenient thing and politically expedient to do; let's stand behind him because we know he needs our support to deal with the massive challenges that will come our way and that will determine the very future of this nation.

I have not always been a supporter of the government of the day, as my online record since 2006 would speak for itself, but in all honesty, given these extremely challenging times, I don't see anyone else who's more able to carry Malaysia through Dr Mahathir Mohamad's Vision 2020 other than Najib Razak. I think you'd agree with me that he'd dealt with the biggest crises we faced in 2014 extremely well, the worst-floods-in-a-decade included. My wish for 2015 is that he wastes no more time and just fix some of the more urgent housekeeping issues that have been letting him down lately. If some of his aides and Ministers have to go so that his Administration can move faster, let them go. As one of Najib's own officers is fond of saying, "Some things are beyond good manners". I wish, too, that the PM would stop being nice to everybody. You don't win wars wish niceness, Sir.

But what do I know, right?

Prime Minister in his End of Year Message on his blog, www.najibrazak.com Wednesday said in the months and years ahead, his focus was on the rakyat.

"Although Malaysia's economic performance has been exceptional, I know that people do not always feel they are getting their piece of our national success.

"So alongside our efforts to strengthen our economy by raising incomes, reducing spending, and boosting productivity, we will also work to reduce inequality by narrowing the gap between the rich and poor," he said.

Najib said he was confident that Malaysia's economy would continue to grow, and bring more jobs and a better standard of living, because of the strong fundamentals, and clear and consistent government policy.

"Our economy is on track to grow by 5.7 per cent this year, and 4.7 per cent in 2015. Our deficit is falling, our reserves are strong; we have trusted financial institutions, low unemployment, and record levels of foreign investment.

"Malaysia's economy is well placed to weather any storms," he said.

Najib said Malaysia needed to be proactive to build a resilient economy that was prepared for any eventuality.

"With global events causing problems for many countries, I am pleased that we have already taken measures to protect our economy. Just last week, the World Bank confirmed that Malaysia remains in a strong position precisely because we acted to rationalise subsidies," he said.

He said the Goods and Services Tax (GST), which would be introduced on April 1 next year, would help strengthen the government finances so that Malaysia could continue productive expenditure on things like roads, schools and hospitals for the benefit of the people.

"And alongside the GST, we will continue the reforms to make our economy more competitive, which will bring more opportunities for our businesses and higher income for the people," he said.

Najib said that to ensure the safety and security of the Malaysian people from the increasing threats of terrorist groups, the government had introduced a new terrorism white paper and was also strengthening the country's cooperation with foreign intelligence agencies.

"My greatest responsibility as the prime minister is to ensure the safety and security of the Malaysian people. Our position is quite clear; we reject this so-called Islamic State. We reject this state defined by extremism. And we condemn the violence being committed in the name of Islam," he said.

On recent floods suffered in several states, Najib said the government s priority was to get help to people who need it now, with the supplies and assistance for those who were stranded or displaced, and financial support, so that people can get their lives back together.

Next year, he said, the government's priority was to rebuild the infrastructure, businesses and homes that were damaged in an environmentally friendly way so that future floods would not be more likely or more damaging.

Najib said Malaysia would play a much bigger role in the region and world affairs in the year to come.

"Next year, we will chair Asean, as we prepare to launch the Asean Community. "In 2015, under Malaysia's chairmanship, we will lay the foundations for deeper regional integration. For the people of Asean, this will mean more opportunities with more jobs, and easier ways to do business.

"In 2015, we will also hold a non-permanent seat on the United Nations (UN) Security Council. Far from just a diplomatic badge of pride, this is a chance for Malaysia to state our support for key objectives, including a dignified and secure future for the Palestinian people and make a real contribution to global security problems," he said.

Najib described 2014 as the most challenging year of his career and one of the most difficult years in Malaysia's history with the disappearance of Malaysia Airlines (MAS) flight MH370 and the destruction of MH17.

"2014 did bring prosperity for Malaysia, but it was also the year we were united in grief. I believe we will come out of these twin tragedies stronger and more determined.

"In mosques, churches and temples, in shopping malls and online, Malaysians responded to these tragedies as one. We have been tested by disaster, but the spirit of the nation remains strong," he said.

MH370, enroute from Kuala Lumpur to Beijing, disappeared on March 8 while MH17, during its journey from Amsterdam to Kuala Lumpur, was shot down in eastern Ukraine on July 17.

On the AirAsia Indonesia flight QZ8501 tragedy, the prime minister said: "Our thoughts are with our brothers and sisters in Indonesia."

Amidst the tragedies, there were high points in 2014, including the country's 40th anniversary of diplomatic relations with China and United States President Barack Obama's visit to Malaysia.