It is starting to look that way.

For a while, Syed Akbar Ali's OutSyed The Box was the only voice in pro-Umno blogosphere lashing out at Najib Razak's administration. Today, after the police report made by Penang Umno leader Khairuddin Abu Hasan against the 1MDB, Syed is officially not ranting alone. A. Kadir Jasin, Zainuddin Maidin, Firdaus Abdullah and Helen Ang, among others, have joined in the growing blogger discontent against our sixth Prime Minister. Whether they are lashing out in chorus or independently is a matter of speculation but what's definite is this: they (perhaps not so much Helen at this point) seem to have been united in their stand against Najib's 1Malaysia Development Berhad. Something in their conviction about the fund compels you to NOT take them lightly ...

The Scribe is in his element: 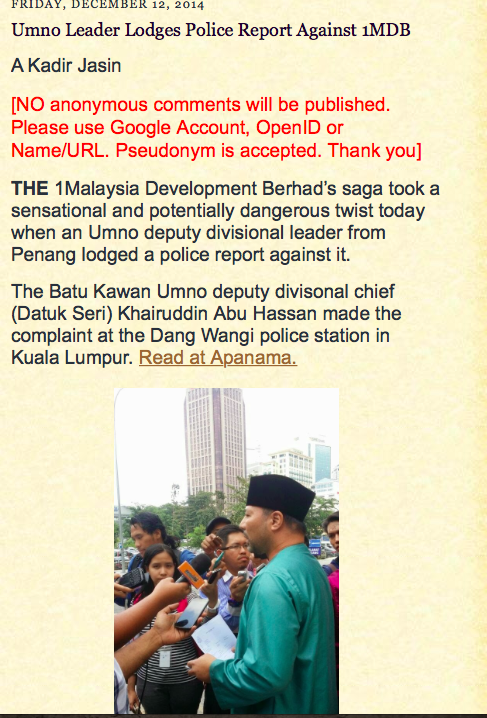 "The sources said 1MDB had requested Bank Negara to extend it non-performing loan (NPL) period from three to six months and was agreed to. It is understandable. No matter how unhappy Zeti might have been with 1MDB borrowing, an extension is needed. If it was not given, there would have been a massive default and Tier 1 banks that extended the loans would have to make huge provisions. This could lead to the downgrading of the local banking system." - AKJ in Umno leader lodges police report against 1MDB

Syed's posting is mostly quoting AKJ's. He makes a point about Mukhriz Mahahtir being "dropped" from the Umno Majlis Tertinggi at the start of his posting. He ends his piece with these jibes:


Kan saya sudah bilang - macais, you better jump ship now. Go ahead. Be a rat. Be the first to leave the sinking ship.  Jangan nak jadi hero.  No one will give a damn about you.  They have made their pile of moolas.  Do you think they will come and visit you in jail? 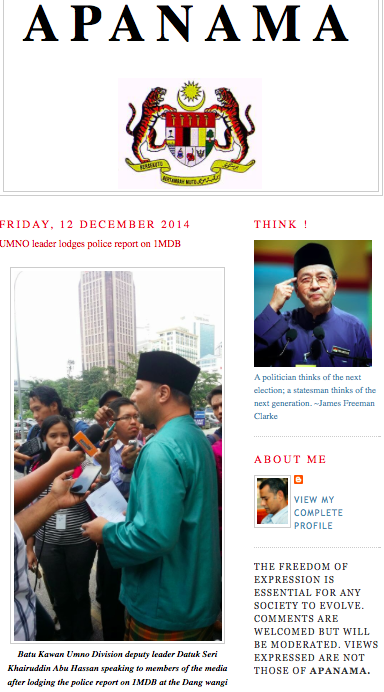 Apanama's Umno leaders lodges police report on 1MDB reproduces a report by the Free Malaysia Today on the police report made by Khairuddin. Interesting comments from one of his readers who called himself Tan Sri Ali, asking all Umno divisions througout the country to lodge police reports against 1MDB in solidarity with Khairuddin. 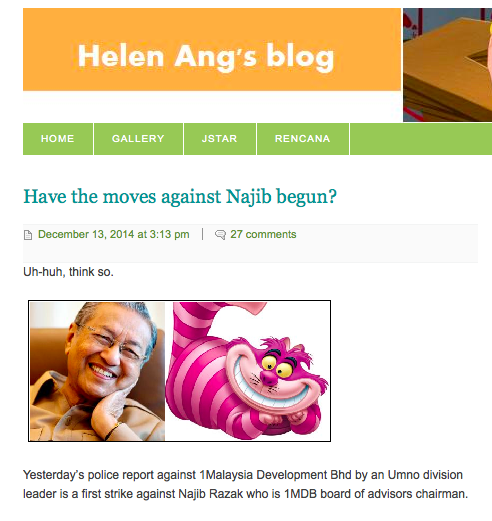 Helen Ang believes the first move to bring down Najib has begun. "(It's) the first strike against Najib ..."

Yes, it does look that way, I suppose. The Opposition is keeping quiet, as they always do when someone within Umno is doing their job for them. But they will resuface soon enough to plant more potent seeds of discontent against Najib and 1MDB. If you notice, the pro-Umno blogs are also very quiet but that's because they basically don't have any information on 1MDB that would have helped them defend their boss. In fact, they are probably alarmed by what they read in Kadir dan Kawan2's blogs.

Things could get worse for Najib. At least for now the exiled RPK, a major force in the movement to topple Pak Lah back then, doesn't seem to be in the mood to join the fray against 1MDB ...

"I no longer see any point in the sort of exercise because no one really bothers about corruption, abuse of power and whatnot, unless it serves a political agenda." - RPK, Pergi Mampuslah Pakatan Rakyat! 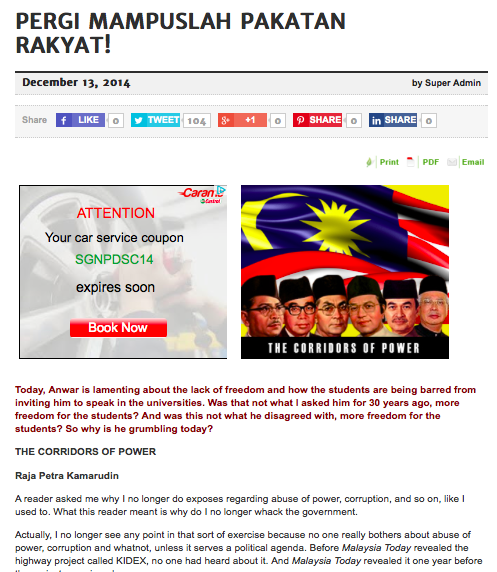 More to come in the days ahead, that's for certain. Like it or not, the PM must shed more light on the whole 1MDB episode after his return from South Korea. Even pro-Umno blogger Bujai thinks so. "And who will be right person to provide us with the answers and explanations?" (1MDB must provide answers).

p.s. I heard that Najib and Tun Dr M had an unscheduled meeting last Tuesday just before Najib left for Seoul for his official visit to the Republic. The meeting lasted 15 minutes. A lot can be said in a quarter of an hour in a four-eyed meeting ...

Sunday:
A neutral Life of Annie gives both sides now in her latest posting Wassap war on 1MDB.

"The only observation I want to make here is that defenders of the BN government seem to be far less sophisticated in the psychological battle as the pro-Pakatan side utilize their potent cyberwar machinery such as Malaysiakini  to spread information to undermine the BN government. I have repeatedly wrote about this : Umno and its BN allies have no real cyberwar strategy at all to counter those of Pakatan's."

Apanama is piling the pressure on the Najib Administration and the 1MDB management in hi slatest posting in which he throws an advice for the PM's "boys" as his parting words:


"In the meantime I would advise Najib's boys to try to keep their cyberdogs in check because they have been forcing dirty laundry out in the open. This is not a request. TQ" - Apanama, 1MDB - Don't shoot the messenger and try to politicise the crime (14/12/14)