Basic lesson on democracy for "puzzled" US envoy Yun

"The Sedition Act does not hinder a vibrant democracy ... (it is) a preventive measure to ensure that no party would incite religious and racial tension that could jeopardise peace and stability in this country." - Foreign Minister Anifah Aman to Joseph Y. Yun, the US Ambassador to Malaysia

I'd expect my government to be firm with any outside parties that try to interfere in our affiairs. Doesn't matter if they are so powerful. Better still if these are the same buggers who lied to us about WMD, who threw suspected terrorists without trial, and then tortured and humiliated them like animals in the name of democracy. Expose their hypocricy!

Nevermind if Lim Kit Siang grovels and tries to get a pat on the back from the Americans (DAP fires Putrajaya for summoning US envoy over sedition law remark). The majority of us patriotic Malaysians aren't fooled by the "puzzled" Yun. His remarks came just days after Vice President Joe Bden's tweets:

p.s. I must also congratulate KJ for responding to Biden re those stupid tweets. 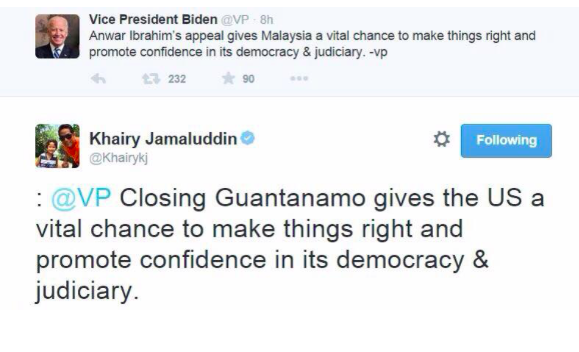 Care to explain how questioning the birkin hippo's expenditure of PUBLIC MONEY on Permata qualifies as sedition?

So it's basically there to quell dissent, cover gomen wrongdoings, and cover the ass of any female weighing over 2,000 kg.

Bro Bru,
Those were the days (in the 50's) that I thought the whites were the savior of anything and everything that the suffering world had to endure. Roy Rogers, Superman, John Wayne , are the heroes of yesteryears that Uncle LKS worships to this day, albeit in the form of Joe Biden et al.

stop meddling in our internal affair!

clean up your sh#t in your own backyard first before telling malaysians what to do and how to run this country!

More hogwash from Lim Kit Siang and the likes of him.

Will Anifah be the first east malaysian to be PM ?

It is not seditious to ask BUT it is the way you ask and the insinuation that you intended that is no no.... Itu pun tak fahamkah ? Ini mesti gagal belajar apa itu 'bahasa tersirat' ! Go back to schoollah !!!

Don't be a bebal and bangang. Comment according to subject matter. This is a security and sovereignty issue so keep your allegations on other matters elsewhere.

Take your allegations on whoever you intend to smear on the anti hadith slanderous blogs. As if we do not know the breakfast he had was with daim and kadir jasin. Daim is sore coz he could not get the sg besi land.

Show proof lah syed sesat instead of posting based on kedai kopi conversation. SO more, refuse to release commentators debunking him. Billionaire belanja only roti canai and he took it hook, line and sinker.

Till today he cannot proof that the cayman island money was used for werewolves of wall street movie.

Of all the countries in this beautiful World, the u.s. is one of those that does not at all have the right to comment/remark or interfere with affairs in another sovereign state. They are the greatest violators of all the fundamental rights and liberties of people around the World. The list would just go on and on - few examples to remind us all - the drone attacks on the hapless people of poor nations, sponsorship of the contras in Nicaragua against the liberators of the oppressive regime, u.s.'s intervention in Angola which saws the massacre of hundreds of thousands Angolans, Vietnam, Iraq, Afghanistan, Abu Gharaib, Guantanamo etc. etc..

It is very shameful that a bunch of "elitist" and so called "intellectuals" (whatever that may mean) in Malaysia always seek u.s.'s nod, assistance, acknowledgement and acceptance. Be they politicians especially the opposition ones, the secularists, some of those champion of causes who label themselves as activists etc. etc..
Another method used by u.s. to destabilise regions is by funding various groups or "causes" thus leading to whipped up discontent and grievances - this is something we at present witnessing in Malaysia.

Jbiden ate humble pie just to be VP of America.

During primaries,he bad mouthed Obamaa,calling him an unqualified person to be President

His integrity is questionable so does his tweets.

don't mistake american is a bunch of jolly good people but their politician is on par with our Malaysian politician , no?

A crow is a crow no matter where it is from, that is they are politicians because there is nothing good that a politician can do. Except in Malaysia the Malaysian politician will never ever admit the wrongs they have done unlike some foreign politicians.
Just look at China, almost everyday a high ranking official is indicted and some are even sent to the gallows. When will Malaysia ever learn ? US, China and many more countries in he world, except Malaysia and the Arab countries where the PM or the heads of states
can remain in power for as long as they want !

I am not in favour of any third country interfering with someone else's business. But America in this instant is not they are just trying to alert Malaysia not to use this to silent the oppositions.
And that is what Malaysia is just trying to do especially when Najib has promised to repeal this act is even going to fortify it. The worse thing is, as I have often said of this turncoat, he will do anything just to remain as PM. Nothing to surprise about what he is very good at, breaking promises after promises. Anyhow don't despair his days and those Umno ' warriors' at Putrajaya are well on the way out for sure.
Please don't try to be another of those Umno 'warriors' and pick on the Americans for what they are doing. Remember two wrongs or even three don't make one right.

Shame that 42 billion in debt went into the 1MD-Wolf's belly, kan?

Guess maybank will just have to patient with this Non Performing Loan.