Updated: fz.com, quoting PMO sources, reports h e r e that Waytha Moorthy is no more. He was said to have handed in his resignation letter after 5, addressed to the PM but it was not stated if he had given the letter to Najib personally. We also don't know if Waytha had thanked the Prime Minister for the squandered opportunity. 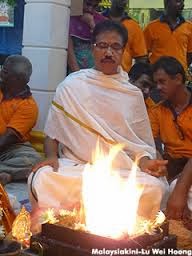 Money, Money, Money?  Hindraf says its chairman P. Waytha Moorthy is resigning  after 8 months as Deputy Minister because he's convinced that PM Najib Razak isn't going to keep his end of a bargain they made just before PRU13 last May.

Someone said Waytha would have to resign because he hasn't been performing at all. "The bugger's report card is all red." But I've checked with Pemandu and they said they don't monitor the peformance of Deputy Ministers. "(We) only have KPI for Ministers with portfolio." That doesn't mean he's been performing, though.

Yesterday someone close to the powers-that-be told me money is the real reason why Waythamoorthy is threatening to quit. "He wanted a Budget, an allocation. The MoF, for example, gets a budget to implement programs and events, money they can dish out, so Waytha thinks he should have his own purse, too, y'know. But Najib says no."

The lawyer hasn't uttered a word about the his resignation, to be fair to him. The longer he keeps silent and let Hindraf speaks on his behalf, the more people will speculate. Already, the blogger Helen Ang thinks Waytha has timed his resignation with the Kajang by-election. Maybe, maybe not, but it looks like the same old, tired political game to many.

The lesson for the learning is the Prime Minister's. A lot of people want something out of nothing. You have to tell them to fly kite, Sir. If Waytha doesn't hand in that resignation letter today, you should promptly and unceremoniously sack him!

After that you can then start looking at several other Ministers and Deputy Ministers who, like Waytha, shouldn't be there in the first place ...