Pakatan leaders are Aliens, according to NST columnist 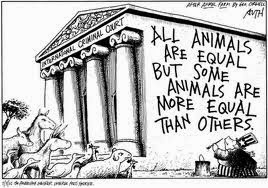 Azmi Anshar, the only NST staff columnist worth reading these days, flirts with some of the most litigious people on Earth in his latest political commentary, Pakatan's twisted hypocrisy an Orwellian art form. Most zEnglish-driven mainstream media editors are happy playing it safe but you can depend on Azmi to confront issues and politicians head-on. I can name a handful of other editors in the same X-league - Shamsul Akmar, Citizen Nades, P. Gunasegaram, Ho Kay Tat (sometimes), June Wong (lately) - but, except for Shamsul, the others hardly comment on the Opposition leaders.

Some excerpts from Azmi's latest column:

But for the opposition types, especially the spiritual and the evangelistic, they are dying to re-invent the sixth sense, with hypocrisy embedded in the psyche so that it is a routine conviction whenever it is expediently self-serving, manifold criticisms or repercussions be damned.

There are many examples of this whacked out "entitlement" scheming, but here's a general sampling:

REBUKE a court ruling as biased if they are convicted, but praise the judiciary as fair if their enemies lose or are convicted;

DECRY government leaders of cronyism and nepotism when they approve of father-son (or wife and daughter) dynasties and install underlings in senior posts;

CLAIM themselves as champions of free speech, but censure the press who won't play ball, limit dissent and sack dissenting members;

PORTRAY themselves as champions of democratic principles, but cocoon leadership within a politburo and restrict members from directly deciding on who leads the party;
ACCUSE the government of fraudulent polling when their party elections are replete with deception, discrepancies and disorder;

CONDEMN the government of financial excess or for raising much-needed taxes, but are unrepentant in rewarding themselves with an exorbitant pay; and,

ACCUSE government leaders of institutionalized racism when their organisations beguilingly prop up one race to dominantly lead and pompously declare themselves "race free" on the basis of merit.

For the record, in case you think Azmi does only Opposition leaders, he has been sued by BN leaders with super powers for his writing ...
at December 03, 2013