Scroll right down for Updates and more pics:


I thought the Sarawak Report, which was set up to help Anwar Ibrahim defeat Najib Razak, was dead and buried after the general election was won by BN. Me wrong. Its tale about a RM110 million condo in New York purchased by a 36-year old Malaysian has been picked up in the last 24 hours by not only Malaysiakini but also by influential pro-establishment bloggers like Big Dog (Movie of the Week pick), The Scribe (Kesian Tun Abdul Razak) and Outside The Box (Umno Bloggers, Sekarang Kita Manpus).

The story about Riza Aziz has gone viral because he happens to be Rosmah Mansor's son from an earlier marriage; therefore, Najib Razak's stepson. Potent ingredients for an explosive expose!

Here's a shot of the New York pad: 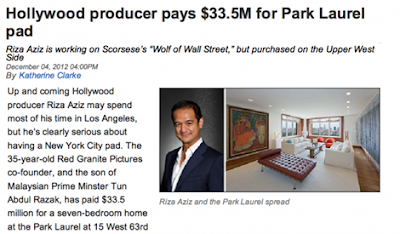 Now if the story's true, Riza's property is just the latest in the list of hot homes overseas owned by Malaysians which have been covered in the Malaysian socio-political blogosphere.

I read somewhere that the PKR sec-gen had denied the story and purportedly told someone that it belonged to one Rahim Ghouse (Saifudin kata banglo di Australia milik Rahim Ghouse?). Not many of today's young Malaysians know who Mr Ghouse is. Ask Anwar Ibrahim, he'd probably remember who Ghouse is and how/where he got all that money.

In any case, here's the house that was supposed to belong to Rahim Ghouse after Saifuddin denied it was his. Slightly cheaper than stepson's purported Big Apple pad: 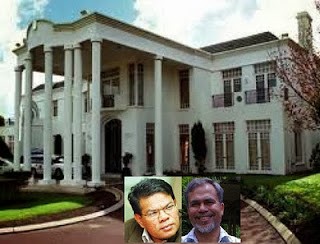 Back in March 2009, this very blog posted From Perth to Ottawa about one of the most expensive homes in Ottawa belonging to a Jamilah, the daughter of Sarawak Chief Minister Taib Mahmud, and her Canadian husband.

You've got to admit, this is one beautiful home: 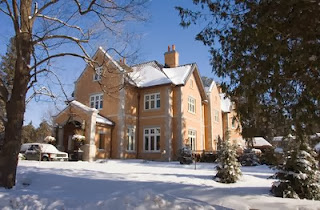 And then there's the famous home in Mosman Park overlooking the unforgettable bay in Perth. First thought to belong to former Prime Minister Abdullah Badawi, it was later revealed by a close relative that the house, which was said to cost some A$10 million, actually belonged to Kamaluddin Abdullah, the son.

Never mind the house, one will be mesmerised all day by the view:

PKR's Tian Chua was quick to call on the MACC to investigate Riza's condo in New York. I'm not sure if the MACC could, should or would do that, but a politician half as sleek as Tian Chua would know that the call itself is enough to build the perception that corruption is somehow involved in the purchase of the apartment. Never mind if Riza is not Najib's son; he is Rosmah's and that's more than enough to end 2013 on a juicy note for some people!

Last year's news. Forgot to let Tian Chua know in my original posting that this Big Apple condo "expose" by Sarawak Report had actually been exposed in December last year (twenty twelve) by celebrity photographer Kee Hua Chee, who even explained how Riza Aziz made his money. Nobody paid too much attention back then, for some reason. 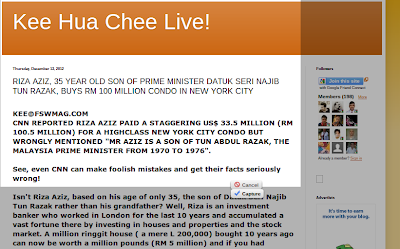 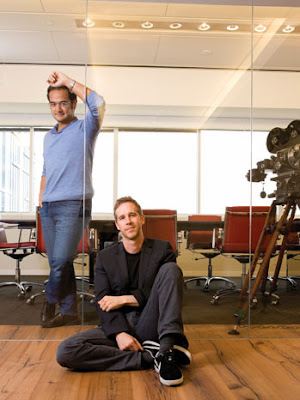 Read Kee Hua Chee's Dec 13 last year (2012) posting h e r e. Even throws in an interview with Riza and his business partner Joey McFarland on the making of the US$100 million Wolf of Wall Street starring Leonardo DiCaprio and the duo's company Red Granite.
at December 28, 2013