Why Teresa Kok dropped her suits against Utusan and Zaini

"She had claimed that the quality of food served to her during her incarceration was so bad that it was similar to dog food, which was reported by Utusan Malaysia. She had initially accused the Malay-language daily of manipulating her words but later admitted to making the remark." - See more at: http://www.themalaymailonline.com/malaysia/article/dap-mp-utusan-drop-lawsuits-after-reaching-mutual-settlement#sthash.nSHMYzNE.dpuf

So why did Teresa did it? Simple. If she had not dropped the suit against Zaini Hassan, Utusan would have definitely nailed her for the dog food remark. That won't look good for her. For my readers' info, it is actually quite common for politicians to blame the media for misquoting them or manipulating their words when they get into trouble for saying stupid things. In the dog food case, unfortunately for Kok, there was solid proof that she did utter the words as reported by Utusan Malaysia ... 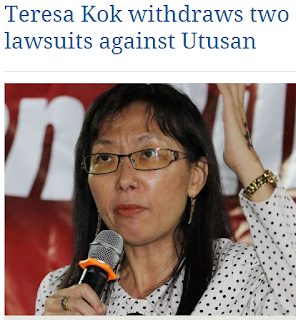 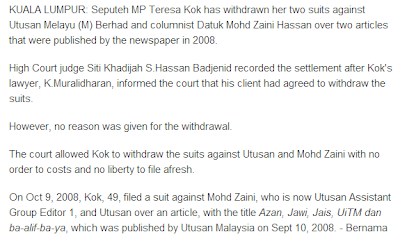 Dog food day. The Seputeh MP did not just withdraw the RM30 million suits against Utusan Malaysia and award-winning journalist Zaini Hassan, she agreed to withdraw the suits without the liberty to file afresh and with no order as to cost. As a layman with some (as in limited) experience of being sued myself, I see this as the equivalent of the MP throwing in the towel. Which is odd, because you know Teresa, she doesn't give in easily. 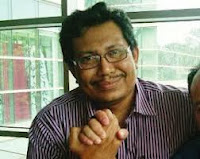 So was there a deal?

I hear it has something to do with Utusan Malaysia's suit filed against her in 2011. Newspapers in this country don't sue people and the 2011 legal action against the YB was a rare one. Some said Utusan was left with no choice but to play the same game. After the 2008 general election, it was apparent that politicians from the Opposition were gunning for certain media organisations aligned to the ruling party. The aim was to sue them till they go bankrupt. Utusan, seen as a close Umno ally, became a favorite target. To date, Anwar Ibrahim, Karpal Singh, and Lim Guan Eng have sued the paper.

In the suit against Teresa, Utusan Malaysia stated the MP defamed the paper by accusing it of distorting its report on her "makanan anjing" claim. It is possible that Utusan may have agreed to drop the suit if Kok withdraws hers.

p.s. I do not condone newspapers suing anyone, even politicians, but it's hard to trust politicians who sue journalists and media organisations and then condemn the media for not being free ...