Why they blame Najib (and why he must call for the next UMNO election in exactly 3 years, regardless of when PRU14 will be)

"... Najib's decision to democratize the UMNO party elections is something that those champions of democracy in the opposition should have set an example by doing long ago. Unfortunately, it looks like this is Najib's most substantial reform thus far, which doesn't say a great deal, but credit should be given where credit is due." - Nile Bowie in Life of Annie, When a pro-Pakatan news portal tries to be neutral, Sept 25, 2013

Some people say Nile Bowie is more Russian than American but the fact is he's an American columnist with with the Russian Today who's made Kuala Lumpur his home, which I think makes him one of a kind. I've met him a few times before and after the 13th General Election and you can tell that he basically subscribes to Najib Razak's so-called transformation plans even if he's not wholly impressed by them. NB must have been following closely the just-concluded Umno election, which he has put on record as "Najib's most substantial reform thus far"; it'd be interesting to know what he thinks of the outcome.

One thing for sure, NB wouldn't blame Najib Razak for the outcome of the election. And neither should we. There are a lot of blog and FB posts out there blaming the PM and Umno president for the "flawed" or "wrong" outcome of the election. I don't see the logic. We were all rooting for our own favorites (eg 521) but just because it didn't turn out the way we wanted it to, we must blame the man at the top?

The new Umno election system -  designed to be more transparent, more immune to money politics, and more democratic - should be used as a benchmark for all political parties in Malaysia. Instead of blaming Najib, we should pressure political parties - especially those holier-than-thou that have been guilty of appointing instead of electing de facto leaders - to walk the talk before talking about national reforms!

All things considered, I think Najib Razak pulled it off quite well. Credit should be given where credit is due. There's room for improvement, of course. I'd like to make a couple of suggestions but read what Najib and Muhyddin had to say about Mukhriz: 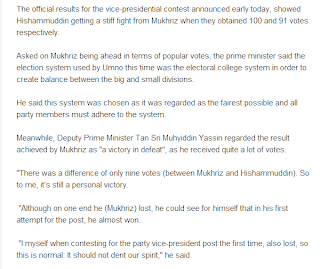 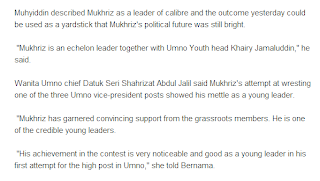 My suggestions to improve the new Umno election system:

1. The party president must call for fresh election in exactly three year's time, NOT earlier and certainly NOT 4-5 years (or depending on when the General Elections will be) which has been the practice before this. This is most crucial because if Najib's transformation within Umno is to work, he has to ensure that the momentum of last weekend's election is not hampered by delaying the next one. A party election this time in 2016 will also ensure that Umno will go into PRU14, which must happen by 2018, with the best and latest line-up.

2. Aspiring candidates must (be allowed to) make known their intention much earlier. Mukhriz announced his decision "rather late", Akramshah Sanusi even later, and we only knew that Maznah Mazlan was taking on Shahrizat Jalil 10 minutes before nominations closed. The process should begin earlier, say 3-6 months before election.

Feel free to add if you have any constructive suggestions ...
at October 21, 2013