The BMW 521 is hell of a good car but don't worry, this is not another auto review, although I must say my article on the Suprima S was as fun as driving the car: that posting shot straight to the top of my blog's most-read articles of the month! 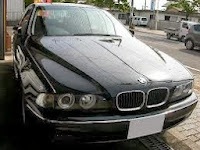 The 5-2-1 of this posting refers to the numbers assigned to my preferred three UMNO vice president candidates, namely:

No 5: Mukhriz Mahathir
No 2: Hishammuddin Hussein
No 1: Ahmad Zahid Hamidi

Not necessarily in that order.

Zahid and Hisham have performed well as incumbent VPs and in their Cabinet portfolios, controversial (at times) but without scandal (the third incumbent is Shafie Apdal). The two are our twin towers of strength, backing our men in green and blue in defeating an armed foreign invasion, without civilian casualty!

For Zahid, especially, the Oct 19 Umno election should be a walk in the park. As Home Minister, he's helped many Malaysians sleep easier with his combative style of dealing with the crooks (and their crooked sympathizers). "Where are the human rights for the police, and victims of robbery, shootings and murder?" he says. His detractors see such statements as unwarranted and controversial; fans think of it as the aura about the man.

Hisham, on the other hand, has become a favorite punching bag of a lot of people, bloggers included. But that's what right hand men are supposed to be: they take the bullet for the Boss. He's perceived as weak by some but Hisham is tried and tested: he stood behind Dr M when Pemuda shook to the very core after Anwar Ibrahim's sacking; Abdullah Badawi left him to fend for himself over the "keris" controversy but Hisham's still standing. 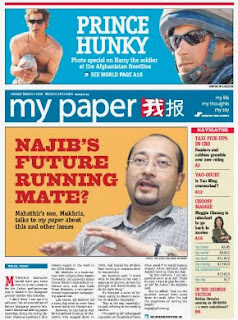 In the run-up to the March 2008 elections, when very few in Umno wished to be seen with me (and vice versa), I openly pinned my hopes on Mukhriz Mahathir: Najib's Future Running Mate? (Singapore mypaper, March 4, 2008). He won in Jerlun that year in a tough general election that saw Kedah fall to Pakatan Rakyat. In the last PRU, he helped Najib Razak wrest back the state. He's come a long way, this dude.

If Malaysians are voting on Oct 19, I am sure Zahid, Hisham and Mukhriz will be favourites. Ali Rustam, Isa Samad and Shafie Apdal are the other three candidates vying for the VP posts.