The jostling and elbowing among the usual suspects begin in earnest but ... 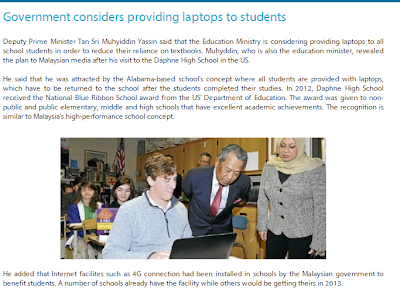 Post-Najib's visit to Silicon Valley, the race for this massive deal is intensifying. The talk is that Francis Yeoh's YTL, which won the RM9 billion Bestari project, is still leading the pack, followed closely by Syed Mokhtar AlBukhary's Puncak Semangat. Trustwell Sdn Bhd, a well-connected outfit, is also in the running. But the dark horse that's making everyone look over their shoulders is Bitara Induk Sdn Bhd. Modest track record compared with the rest, but these guys did pip past YTL in a considerably smaller (about RM300 million) but no less significant government project recently.

Both the PMO and the DPM's office must expect talk that some close aides are trying to get their fingers in this pie. Biasalah? Well, perhaps it is still the hunting season for aides. But just remember, it's been proven that not all the talk in blogosphere about some of the aides has been crap.

I'm all for equipping our students and teachers with laptops or tablets but let's learn from recent past lessons. If we don't, a good thing like this could become a Bang Din's biggest bane.

Read also
Thailand hopes to give 13 million students a tablet each
1computer for 1student: Wise or Cronyism?