Anwar Ibrahim says the Pope asked to meet him, not the other way round

Why is Anwar so cagey about his meeting next week with Pope Francis? He said it was the Pope who wanted to see him and not the other way round. Why did he have to stress that point?

Excerpts from the fz.com report Anwar: BEC is a biased group 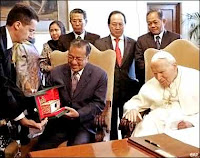 Dr Mahathir was the first Malaysian head of government to have met the Pope and that took place in 2002. Under Najib Razak, Malaysia went on to establish diplomatic ties with the Vatican after the Prime Minister met the Pope in 2011. Islam is the official religion of Malaysia but Muslims here have no problems with having diplomatic ties with the Vatican and did not go to the streets to oppose their PM meeting with the Pope. Neither Dr M nor Najib converted to Christianity after they met the Pope.

So, you see, someone's trying to make something out of nothing here. This is his problem.

The drama-king is at it again. Anwar's greatest fear is if people tend to forget or ignore him. Psychopaths are like that.

another denial by the king of bullshit, Mr ANUwar Berahi

Haha! Probably drM and Najib were paying good money to ask to meet the pope rather than the pope asking to meet them like anwar. You probably felt jealous on this. Come on bro take it easy dont feel sour. If pope ask to see drM, dr M probably thank God for this.

Dr M and Najib were paying good money to ask the meet the Pope, you say? Why don't I quote for you this article published by the Malaysiakini?:

Mahathir to meet the pope next month
4:15AM May 24, 2002
Prime Minister Dr Mahathir Mohamad has been invited to meet Pope John Paul II next month to discuss the Palestinian-Israeli conflict, officials and reports said today.
The meeting was scheduled to take place June 7, two days before Mahathir's trip to Switzerland and Luxembourg, the New Straits Times said.

The invitation was extended by the 82-year-old pope in recognition of Mahathir as a leading Muslim leader whose moderate voice has influenced the Muslim world, the newspaper said.

A government official who declined to be named confirmed the report ....

"Why is Anwar so cagey about his meeting next week with Pope Francis? He said it was the Pope who wanted to see him and not the other way round. Why did he have to stress that point?"

I think it's because this country has lost all perspective and sanity, and people are now hyper-sensitive.

That Christian-Muslim dialogue in Pulau Pinang was accompanied by demonstrations, police reports and other hoo-hah.

I'd be paranoid too. Every molehill becomes Gunung Kinabalu nowadays.

Not surprising there are still idiots and bigots licking Anuar backside believing and supporting him all the way....from the front and back...you know what I mean???

as usual,this bastard son of a jinn excels in making Malaysia look like a backwater piece of shit in the eyes of the world. and only bastard Malaysians who see the country the same way support him.

Why Pope must invite? Why not pope himself co e and visit Malaysia ooopps Anwar.

If dr M can pay good money to meet American president, he is willing to do this again to meet world important leaders

Did you say"New Straits Times"??

after all the pope is part of your so called GOD system. Go to vatican and ask for the truthlah...why so soohai one....niamah

Do you really know the true reasons why the egregious Mahathir and turncoat Najib went to meet the Pope ? I am sure you have heard of 'for political mileage ' and those were the aim of the visits and for nothing else, period. Did they tell the pope not to use the word 'Allah' ?

Well, Najib's liaison with the Pope led to the establishment of formal diplomatic ties. It was no gimmick. You can ask to meet the Nuncio here if you don't believe me. Surely you recall, he even commented on the Allah issue. Or, rather, they tried to pit him against the Muslim authorities in this country.

As for the Tun, well the Pope himself - not the people close to the Pope - wanted to meet the man. If you are saying the Pope did it for political expediency, that's your opinion. Everyone can accuse the Pope of anything. But if you were the Pope, I'm sure you'd have wanted to meet Mahathir. He was the voice of conscience of the Third Workd, the dude who hounded the Americans and their allies and shamed them into ending the atrocities against Bosnia when the rest of the world were too afraid to say anything.

Demonstrations in Pemang? Well, don't act surprise Anon, we all know who love street demos, sit-ins police reports and lawsuits, don't we? I think Anwar is cagey about the meeting with the Pope because the news might spark bad press for him but because it has not created the kind of controversy that he can use for political mileage.

I can guess what Bang Nuar will be telling the Pope ... that if he is the PM of Malaysia, he would allow the Christians to use "Allah" in the Bible.