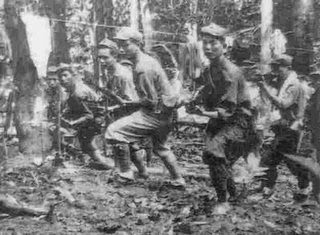 
... He had loved very much his country — his place of birth. He had the wisdom and courage to bring peace to our country. He had done his part and yet he had been denied return to his beloved Motherland. History will point the finger of indictment at those who break the promises. Let it be, the people are not blind.
Farewell, Comrade Chin Peng — our beloved leader, our comrade, the courageous freedom fighter!

* Abdullah CD was the chairman of the Communist Party of Malaya.

** This is the personal opinion of the writers or publication and does not necessarily represent the views of The Malay Mail Online.

Chin Peng worshippers in the newsroom. There is only reason why Abdullah CD's love letter to Chin Peng got published in the Malay Mail Online: there are people at the Malay Mail Online who sympathize with Chin Peng, who do not know or care about the history of his atrocities against the people of this country, who idolize the Butcher of Malaya.

I would not publish Abdullah CD's letter in my portal. The Star did not publish it. The NST didn't, either. Nor would Sinar Harian, Utusan Malaysia, the Mole. Maybe the Rocket would but I believe it didn't. Heck, even the Malay Mail print editor didn't publish it.

Why? The armed campaign led by Chin Peng against Malaya killed more than 10,000 Malayans. Those Commies didn't kill just the soldiers and the policemen, they tortured and butchered ordinary citizens, orang-orang kampung, women, children and old men, anyone who did not support their struggle for power, anyone they suspected to be a talibarut, anyone who stood in their way. No, I will not disrespect the children and grandchildren of Chin Peng's victims by giving someone space to glorify the monster. I will not insult those who gave their lives defending this country against a terrorist, a murderer.

p.s. The Malay Mail Online's disclaimer is a joke and should read:

Read also:
Propagating Communism by Zakhir Mohamad.
The blogger Big Dog calls on the authorities to arrest the editor of the Malay Mail Online, who used to head the anti-Najib political news portal The Malaysian Insider, "for allowing room to propagate the Communism ideology". 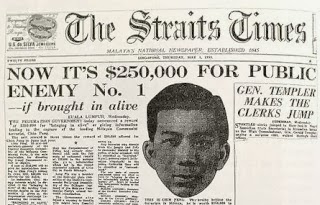 In 1974, CPM incorporated target assassination as part of their rebellion. As such, IGP Tan Sri Abdul Rahman Hashim was assassinated in the heart of Kuala Lumpur on the way to work on 7 June 1974. Perak CPO Tan Sri Khoo Chong was shot on 13 November 1975 on his way for lunch.


Raising the Chin Peng spectre for a selfish political end by Shamsul Akmar
The editor of The Mole, writing in the NST, attacks Anwar Ibrahim and Tian Chua for trying to score political points with the Chin Peng issue.

... to promote "yang sudah, sudahlah" to those who had become Chin Peng's and CPM's victims, and suffered the atrocities with their families, is excessively presumptuous on Anwar's part.
The fact that most of these victims and families had chosen to not demand vendetta for the atrocities is a magnanimity becoming of believers of any faith.

As for declaring Chin Peng a patriot; the retired teacher now realises that there is no cure for imbecility.