Awakening KL launch postponed "so as not to promote further misunderstandings"

"Given the politicisation of the (book) in media reports and in an effort not to promote further misunderstandings, the official launch in Kuala Lumpur will be postponed ... We call on the media and the blogging community to act responsibly, to read the book before making assessments and to avoid erroneous speculation." - Bridget Welsh, editor of Abdullah Badawi's book, Awakening 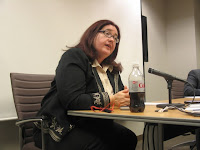 Bridget Welsh's attempt to blame the Malaysia media and bloggers for politicizing Abdullah Badawi's book foolishly-titled Awakening is feeble and her call for us to "act responsibly" a tad rich. I'm being forgiving here (in the spirit of the season, you see).

Instead of putting the blame on others, Welsh should have done her homework, engaged the media/bloggers, and avoid politicizing her own work. Being a Singapore-based "outsider" is not an excuse; unless she is a very slow learner, Welsh should be an "expert" on local affairs by now, having been a familiar fixture here in Malaysia for several years. I remember being on the same panel with her at the Chinese Assembly Hall in KL in conjunction with the launch of another book in 2009 (read here), which means that four years ago she was already considered an expert on Malaysian politics.

And surely Welsh knows that getting Nurul Izzah binti Anwar Ibrahim to launch the book* is an act of politicizing the book with the aim of creating all kinds of "nasty" speculation. From where I see it, Welsh had it all planned, so don't take us all for fools lah.

* Welsh's statement to postpone the Aug 16 Malaysian launch of the book by Abdullah and Tun Musa Hitam h e r e.  We have to assume that the Aug 30 launch of the book in Singapore by the daughter of Malaysia's Opposition leader will go on as scheduled so as  to promote further misunderstandings ...