Global Witness on Taib: Was it really a sting operation? 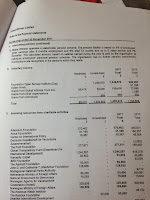 WHO'S BEHIND GLOBAL WITNESS? The Mole has the story, h e r e. Also picked up by the Malay Mail.

One has to wonder just how many more outfits and NGOs in and on Malaysia are funded by this man, who obviously has a hard-on on this country ...

At the 12th general election in March 2008, which was Barisan Nasional's worst, Taib Mahmud still delivered 29 out of the 31 parliamentary seats in Sarawak for the ruling coalition. At the Sarawak state elections two years ago, the Chief Minister made mincemeat of an over-confident Anwar Ibrahim and Co, winning 55 of the 71 seats and retaining the two-thirds majority. Clearly, if Pakatan dreams of conquering Putrajaya, it has to first take Sarawak, considered a "fixed deposit' for Najib Razak's BN because of its ability to deliver the seats.

In order to overcome Sarawak, they will have to bring down Taib.

The 'secret' short movie Inside Malaysia's Shadow State produced by Global Witness, a previously obscure UK-based NGO, is seen as such an attempt to bring down Taib. The movie implicates the Sarawak Chief Minister and his family in alleged multi-million ringgit shady deals. Despite its insistence that the movie was "apolitical" (see the interview by Malay Mail's Haresh Deol, GW defends Secret Video), many of us are far from convinced. The timing for the circulation of the video itself, at the verge of Malaysia's 13th GE, makes the political observer laugh at the claim that the movie is aimed at exposing and fighting corrupt practices.

Me, I find it insulting that these English chaps think that hearsay is enough to prove that someone is corrupt. Did they think we were going to behave like natives and swallow their words hook, sink and liner like in the good, old, colonial days?

Read the Benchmark's GW on Taib: Was it really a sting operation? (The Mole picked up the positing by the anonymous blogger and sells it as GW on Taib: A well-crafted Conspiracy?

Could it be a well crafted conspiracy against Taib by his own kin who have the coveted Chief Minister's seat at sight?

Could it be the Rahman family's last attempt at the throne?

The Benchmark also thinks that the attack is not purely against Taib per say but it is aimed at derailing Taib's transition plan and sabotaging his chosen successor, whoever that may be.

The good thing now  is a police report has been lodged against the short movie. When investigating the movie, I am sure the authorities will follow the money trail. I am curious to find out who is financing Global Witness, really.

I have a gut feeling about this but let's wait a little for that to surface, shall we?
at March 22, 2013