Musa Aman in the limelight, again! (Migrating to Sabah Part 3)

Dear Readers, most people read my blog for political blood and gore so I will try my utmost after this posting NOT to publish more positive, feel-good stuff about the Chief Minister of Sabah. But it does seem to me that the more his foes (especially from Semenanjung) try to malign him, the more audible and visible his otherwise shy supporters and admirers become. After the glowing salute by the state's Archbishop yesterday (read h e r e), another group community leaders from the state comes forward today to put on record the achievements of their leader. This time it is the KK Chinese Chamber of Commerce and Industry. Musa, if you didn't know, helped bring in some RM10 billion in foreign investments to Sabah in the first quarter of 2012, Malaysia's highest. Another good reason why people are lining up to migrate to Sabah. 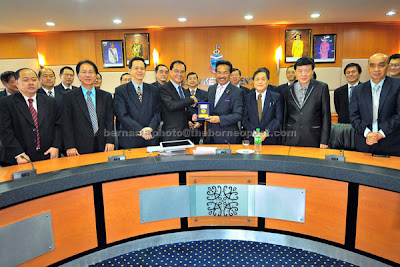 from the daily express

KKCCCI confident with present State leadership
Published on: Wednesday, January 23, 2013
Email to a friend      Printer Friendly
Kota Kinabalu: The Kota Kinabalu Chinese Chamber of Commerce and Industry is confident that Sabah will continue to prosper under the present leadership.

"He has entrepreneurial qualities due o his business background.

The state's financial position is stronger than ever with significant state reserve," he said during a courtesy call to the Chief Miister this office in Wisma Innoprise today.

Accompanied by some 40 members including the Management Committee members of KKCCCI, Michael said the chamber was more than happy to cooperate with the government and act as a go-between and facilitator between the government and the Chinese business community in Kota Kinabalu.

"We want to help our members resolve any commercial issues affecting their businesses and help facilitate dealings with City Hall and other government bodies," he said.

Meanwhile, Musa said the State Government always recognized the contribution of the Chinese community to nation building and the economic growth of the state.

"You have played a significant role in the growth of businessesthroughout Sabah. You have also contributed to welfare and educational causes," he said.

Musa who is also Finance Minister said the state has managed to attract foreign investment over the years including last year, which saw the first quarter pulling in RM10 billion worth of investments, the highest in the country.

"More and more foreign investors are showing interests including those from the US, Eastern European countries, Korea and of course China, which is a significant eonomic force now," he said.

He said the growing interest to invest in Sabah was due to its social, economic and political stability, important pull factors for any country.

"Nobody would want to visit your country, let alone invest, if they deem it politically unstable or there is social unrest. Fortunately, we in Sabah are blessed not only with natural wonders and a rich cultural heritage but also with hospitable people who value peace and harmony in spite of our religious and racial diversity," he said.

He said it was therefore important for peace loving citizens in Malaysia and Sabah included to uphold the spirit of unity, cooperation and consideration so as to continue the state's path to prosperity and progress.