A Scorpene trial in their own dark minds 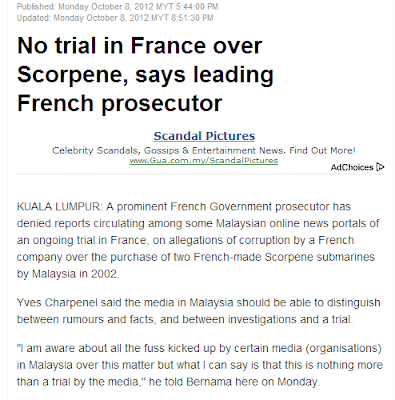 Read the articles in the Star here and read it again, if you like, in the New Straits Times here. Both quoted the interview given to Bernama by Yves Charpenel, a French government prosecutor. Mr Charpenel says contrary to claims made by some parties, there is no Scorpene trial in Paris or anywhere in France.

There is only a trial by the media, he said.

And true enough: one such media, The Malaysian Chronicles, pro-PKR to the very core, clutches at straws to save the day for its political masters today in What no trial: French lawyers debunk Bernama report on Scorpenes hearing.


"Whether Yves was accurately quoted and reported in the right context remains to be seen. However, William Bourdon, the French lawyer acting for Malaysian NGO SUARAM has debunked the Bernama report.
"Yves Charpenel's statement is absolutely contradictory with the current investigations. The Tribunal deGrande Instance has convened a criminal inquiry of which SUARAM has been accepted as a civil party since March 2012," Bourdon, who was deported from Malaysia when he came to brief his client last year, said in a statement released by SUARAM late on Monday night.
"Upon completion of the inquiry will the investigating judge make the decision of whether the case goes to full trial. It's the investigating judge that makes the decisions not the prosecutor. To our knowledge the current prosecutors in charge of the case have not made any such statements as suggested by Charpenel. The two Judges, Roger Le Loire and Serge Tournaire continue their investigations on the Scorpene inquiry”.
In the end, they contradict each other! The truth will prevail, always and in all cases. We have been watching this charade for too long. It is indeed time to end this irresponsible politcally-motivated game of perception that Anwar and Co are playing on all of us.

I'm not advocating we cry treason. No need for that. We know who's lying now. Mr Charpenel is a government prosecutor. Mr Chapenel does not represent the Malaysian Government. He represents his own Government.

Mr Bourdon, on the other hand, represents Suaram. And Suaram does not represent me or you. Who does it represent?
at October 09, 2012