Updated, 4 July: Perhaps Aireen Omar had not hit Malaysia Airports hard enough, so her boss Tony Fernandes has to take matters into his own hands on his blog today. 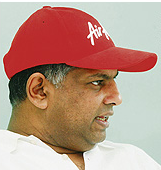 Tony: I am proud to be Malaysian and want this country to excel. But an undependable airport operator does no one any favours, not least when our neighbours are taking aggressive steps to tap into the rapid growth of low-cost carriers.


Original posting
AirAsia CEO Aireen Omar's teasing words about the possibility of the low-cost carrier NOT moving to KLIA2 next March [Air Asia has LCCT back-up plan - Business Times, July 2] should not be taken lightly. In fact, the authorities should start thinking really hard about that actually happening, especially so after Tony Fernandes' unexpected move out of Malaysia to make Jakarta his regional hub which, according to Business Times, means lesser role for its KL headquarters.

What's our Plan B if Aireen and Tony actually decide to turn their backs on KLIA2? Part of the new airport was conceived with AirAsia in mind, after all. Who will fill the vacuum? Can that void be occupied?

The answer is obvious: air traffic will grow with or without Air Asia, with or without Tony Fernandes. If Aireen decides to move to KK or Kuching, welll and good; if she thinks only "virtual hub Changi" is good enough for her, well, good luck. Malaysia and Malaysians have done so much to help Air Asia grow and be where it is today, a Malaysian-born carrier that went from being bullied to being the bully (or so some say) and on their part AirAsia and Tony Fernandes have enabled many Malaysians to fly by making flying more affordable.

But let's be realistic: you need to fill up KLIA2. In fact, whether or not AirAsia moves to KLIA2, the country should be looking at giving birth to another low-cost carrier to cater to demand. Tan Sri Abdul Aziz Abdul Rahman, the former Malaysia Airlines boss, made the suggestion not too long ago, before Tony Fernandes announced the move to Jakarta. Read the forum MAS should venture into low cost airlines like SIA (Tiger) and Qantas (Jetstar).

Actually, it doesn't have to be MAS. Anyone can start a low cost airline.

Syed Mokhtar, for example, can do that easily. He already has an airport in Senai ...

It doesn't have to be Syed Mokhtar, of course. You can stretch a man just so far and wide and that man has enough on his plate, if you ask me. And Malaysia is not short of talents, they just need to be given their windows of opportunity to build on their dreams. Just like Tony Fernandes was given his by Dr Mahathir, but that's an old story...

There is no need to fully liberalize the aviation sector yet, just open up enough for a few more players to take advantage of the rising worldwide demand for low-cost travel. Like it or not, the Government needs to do what it has failed to do for the last decade: protect MAS against unfair competition. It is our national airline. It's worth saving.

I see the A380, which made its maiden flight to London on July 1, as a huge turning point for MAS. So I think Tony isn't the only one who was relieved Najib Razak put a stop to the share swap between MAS and AA [read here]; MAS boss Ahmad Jauhari should be delighted, too, though you won't catch him saying it in public. AJ, who came into MAS AFTER the share swap had been decided by Air Asia and Khazanah Nasional, now has the chance to prove his mettle, without Tony and Air Asia but with the tools, government support and the A380s (MAS is to take delivery of its second plane this month, I was told by Big Dog who flew on the ferry flight  from Toulouse with 90 others last week; read New MH hits the market ...). All he needs now is the confidence of all his staff. With that confidence -  and given a level playing field - MAS can compete with the best of them out there.
at July 03, 2012