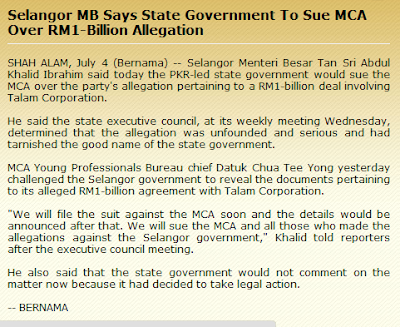 SHAH TALAM, July 4: As one who will vote in Selangor in PRU13, I was quite interested to read about Selangor's Super RM1 billion deal fiasco and Super Crony, to see if there was any solid details in the accusations, or if it's just political hogwash. You have to admit that the relationship between the Selangor state government and Talam Corporation has been rather mysterious. Talam is the property company that former GLC boss Khalid Ibrahim "rescued" almost as soon as he was made Menteri Besar of the state after PRU12 in 2008. The knee-jerk quick response from the state government to threaten MCA with a super lawsuit for bringing the RM1 billion deal up, however, has made the matter more intriguing. Now everyone is interested to know more.

I have some experience with Talam. Bought their house in Lestari Puchong a few years ago. There were some defects and so we naturally brought the matter to them. Offered pittance so we brought it up to a tribunal, which awarded us a fair sum which was substantially more than Talam had offered us. Haven't been paid a single sen till this day!