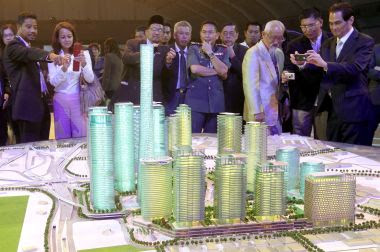 KL's coming of age. Don't you think it has a nice ring to it - Tun Razak Exchange? That's what the KL international financial district will be called from today. And it's good to know that TRX is not just about a collection of tall, intelligent buildings in an already very concrete city centre, and billions pumped in by rich investors. There's more spirit to it: Parks. Walks. And jobs. 500,000 good jobs with over 100 global companies that will call TRX home. At the launch, Najib Razak dubbed it "the future of our economic growth". At the end of the project, KL will be join the list of 20 most livable cities in the world. Can 1MDB deliver? Can KL do it? I don't see why not. Do you?

p.s. I bumped into former Mayor of KL, the man who made KL City Hall so profitable it should have been listed on the Bursa [RM2.56 billion in the bank when he left, according to The Edge] , and a supporter of the TRX idea. Ahmad Fuad Ismail is still "jobless" but he won't be for long, I guess. Business and political acumen like his is a rare commodity.
at July 30, 2012