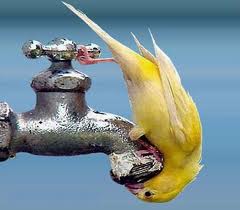 ... and something RM1 billion and dirty. Used to be that if you live in Selangor, even in the jin-bertendang parts like Puchong, you could boast of being a citizen of the most developed state in Malaysia. Then in March 2008 you could brag that Selangor was one of the states that created the political tsunami in Abdullah Ahmad Badawi's Malaysia. The new state government came in and promoted all kinds of freedoms, including free water (though terms and conditions apply).

Today, just a little over 4 years later, the euphoria seems to have died down. The tsunami is giving way to a Looming Water Crisis, h e r e.

Tough luck, fellow Puchongites. If you like, treat this as a sacrifice we have to make for wanting change for the sake of change ...

YB Chua Tee Yong's tweet earlier today, retweeted by Wong Chun Wai, the Star's big editor, is also a potential bad news for Selangor. YB Teresa Kok seems not to know about what's RM1 billion and dirty in her (and my) state, though, so we'll have to wait for Chua Jr, who is also deputy Agri Minister, to give us more bad news ...
at June 30, 2012