BUT NOT SO WWW15E. YB Liow was quoted by the NST as saying that he gave up the WWW15 plate number as it was the "most righteous action". Sure, of course. But what the Minister should have done was clarify instantly. In this Internet age, speed is crucial. I sent him an SMS asking if he had bid for WWW15 on May 28. He did not respond, tak pe lah, maybe he's got a new special phone number, but he or his office should not have waited TWO WEEKS to issue a simple press statement explaining how the WWW15 had gone to him instead of the highest bidder. That's two weeks of damage done. 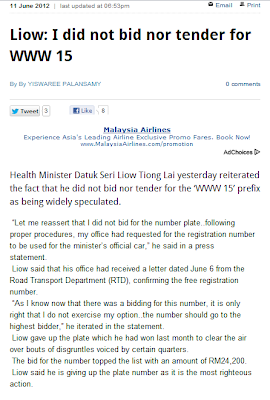 YB Liow said he couldn't respond earlier because he was abroad: Tiong Lai gives up WWW15
at June 12, 2012