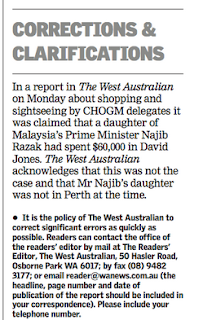 Lessons from NST's Correction, Clarfication and Apology to Nick Xenophon. Remember The West Australian's reckless report about our PM last November? The above was how The West Australian admits it erred. Short, impersonal and not even an apology (and, yet, apology accepted).

Early this week, the New Straits Times published a report quoting an MP, which contained a piece of information about Nick Xenophon that turned out to be wrong. So NST did the needful: it quickly published a correction. Plus a retraction. And an apology! It even deleted the said article from its online site. In short, the whole works!

The NST's correction, retraction, and apology:

And who the hell is this Nick Xenophon, again? He isn't even a Minister, just a Member of Parliament of Australia. The reason he was in the news was because he was made the leader of this group of international election inspectors invited to Malaysia by Anwar Ibrahim. Despite being what The Malaysian Insider described as "a known close associate of Anwar Ibrahim", Xenophon insisted we Malaysians believe in his independence!

How did the "mistake" come about?
One detects no malice in the NST report: A Malaysian MP cited Xenophon's speech that appeared anti-Islam. It turned out that some Internet rascal had doctored that speech and distributed it. The NST reported what the MP said. It may have checked and double-checked but obviously it did not triple-check the authenticity of the statement purportedly made by Xenophon.

The point is, the NST DID NOT replace the word "scientology" with "Islam", it was merely quoting a statement made by a lawmaker. The Malaysian Insider's report (below) is, therefore, both erroneous and, perhaps, even malicious. 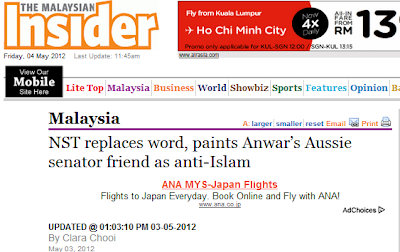 A mistake the NST made is easy to commit these days. The admission that one has made a mistake, like the one the NST made - overboard and grovelling at times - takes sincerity and guts.

I almost fell for it (the doctored Xenophon speech). See the comments section of my 26 April posting on Nick Xenophon H E R E.

This particular comment came in from an Anonymous at 11.25pm that day:

Anonymous said...
Bro Rocky,
More about Mr Nicholas Xenophon and his previous remark on Islam. Hope that you can publish it.
Yang ikhlas,
Concerned Ummah

There is a baying for the blood of Liberal Senator Cory Bernardi for saying this:
“Islam itself is the problem - it’s not Muslims,” he told radio station MTR.
“Muslims are individuals that practise their faith in their own way, but Islam is a totalitarian, political and religious ideology.
“It tells people everything about how they need to conduct themselves, who they’re allowed to marry and how they’re allowed to treat other people.”

Julia Gillad demands the resignation of Bernardi:
Ms Gillard used Question Time on Monday to call for the heads of Coalition immigration spokesman Scott Morrison and outspoken South Australian Senator Cory Bernardi....
Ms Gillard says the politics of the past week have raised the “spectre of One Nation”.
“It is the job of national leadership… to explain to people there is ultimately nothing to be afraid of,...There is another path, and that is seeking to channel that fear and that resentment into political gain… that spectre of that ugly politics. That grubby path is before us again and the principal task of this Parliament this week is to banish that spectre again.”
But here’s the odd thing. I have not seen a single word of criticism from Gillard, Labor, the Greens, the ABC or the Fairfax media for this even nastier attacks from Independent MP Nick Xenephon - attacks in which just one detail has been altered:

Xenophon adjournment speech, 17 Nov 2009
What we are seeing is a worldwide pattern of abuse and criminality. On the body of evidence this is not happening by accident; it is happening by design. Islam is not a religious organisation. It is a criminal organisation that hides behind its so-called religious beliefs. What you believe does not mean you are not accountable for how you behave.

Xenophon questions whether Islam deserves support:
I ask my fellow senators: do these things sound like religious activities to you? Does this sound like an organisation that should be receiving support from the Australian taxpayer in the form of tax exemptions because they claim to be a religion? In the past Islam has claimed that those who question their organisation are attacking the group’s religious freedom. It is twisted logic, to say the least. Religious freedom did not mean the Catholic or Anglican Churches were not held accountable for crimes and abuses committed by their priests, nuns and officials—albeit belatedly. Ultimately, this is not about religious freedom. In Australia there are no limits on what you can believe. But there are limits on how you can behave. It is called the law, and no-one is above it.
So the difference is...?

About eight hours 20 hours later, however, another Anonymous left this comment under the same posting to warn others that .. :

Anonymous said...
Nick Xenophon isn't "anti-islam", he is "anti-scientology". Would somebody go back and read the actual speeches?
8:28 PM