More myChinese Perspectives on Bersih 3.0 as a blessing in disguise

Today, even The China Press, which used to be blindly pro-Bersih, has second thoughts. On its front page this morning, the newspaper blows up the stills above (taken from a widely-distributed video footage of the moments when Anwar Ibrahim apparently gave the signal to Azmin to get a PKR thug to start the provocation that forced the police to fight back) and supposes what other Malaysians already know: that Anwar-Azmin started it all.

Also today, in their analyses, several  bloggers who had supported the original Bersih in 2007 are convinced that Bersih 3.0 was used by the usual suspects in Malaysia to effect a "regime change" by means of violent uprising the likes that the world has witnessed in the Middle East. Helen Ang, a Malaysian who is proud to be ethnically Chinese, writes: Bersih 3.0 Aiming at Regime Change.

Miss Ang, in her posting, came to the defence of The Star columnist Joceline Tan, who's been shelled by DAP Chinese for her article A Big Crowd _ And Big Problems.

If you're wondering why I've been focusing on the Chinese "angle" to Bersih, it is because of the view that Bersih 3.0 got a lot more support from Malaysian Chinese compared with the 2.0 last year and the original one in 2007. Quoting Prof James Chin of Monash University Sunway Campus:

“Check the international reporting that day — the key words were rioting, mob, violence. The core message of Bersih was lost."

I don't think any Malaysian Chinese liked what he saw that day. 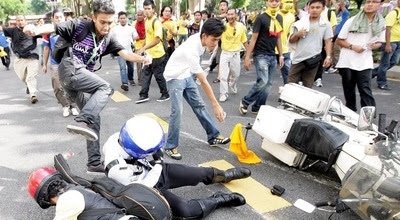 p.s. Talk about international reporting, check out the Montreal-based anti-war Global Research's report "The US-sponsored protest movement in Malaysia" picked up by The Mole earlier today.

Updated: And from Nuraina Samad's blog, a look at Occupy Wall Street which inspired some of our people to do the OccupyDataran. Note the similarities ..

“How can anyone take them seriously? They look like homeless people,” quipped Financial District bartender Kimberly Leo.
“I saw one woman complaining about not having a job, but she had a shirt with the word “nympho” on it,” Leo, 26, said. “These people need a change of wardrobe and a shower.”

Read more: http://www.nypost.com/p/news/local/ows_bums_6HKLpTatoPDLCMZ7F5IXjI#ixzz1thfJHZZ5
at May 02, 2012