Ground Zero of the Bersih 3 Riots and an Obituary


This letter came with many other mails and text messages from Malaysians who have seen  the Schelling Incident unfolding in front of their eyes on YouTube and blogs, not just on the mainstream media, and who now demand a stop to this nonsense. Like Mr Lim Chee Wei, most Malaysians believe in democratic progress but not by burning down the city. My friend Big Cat puts it simply in Punish them at the ballot box (and in court) : "The so-called Bersih riots opened the eyes of many, especially those in the middle ground, of the dangers faced by this beautiful Malaysia."

But everything happens for a good reason, she says ...

Chaos and the Beginning of the END
Lim Chee Wei
29 April 2012
An obituary is something that is not easy to right. One never knows what to say as consoling those that have lost a loved one is nearly always an exercise in futility. The violence and chaos rained down by thousands of bused in Opposition members led by Keadilan’s Deputy President Azmin Ali yesterday was the final nail in the coffin of the political life his mentor, Anwar Ibrahim.

I am not a fortuneteller but the writing is clearly on the wall. This is the beginning of the end of the political career of Anwar Ibrahim which has spanned more than 40 years. What should have been the natural support base of Pakatan Rakyat marching in KL on Saturday now, more than ever, has begun to count the toll of damage Anwar has done to the argument that all rallies are peaceful.

The advent of a full democracy in Malaysia is not dependent on Ambiga’s unreasonable demands for the resignation of the entire Election Commission or the implementation of all reforms demanded before the next GE. Full democracy in Malaysia is dependent on the setting up of a sustainable and viable two-party system. People seeing Anwar lose control and sending his storm troopers in to destroy everything in their way has led many peacefully marching to believe that for democracy to face the BN, Anwar has got to go.

The sheer desperation and willingness to cause the BN political damage at any costs, even causing damage and injury, shows that Anwar knows this GE is his LAST chance. It is the final salvo of one of the most divisive figures in Malaysia’s political history. Anwar will be 65 this year and waiting for the 14th election will see him just a shade under 70. This is his time, after GE13, it will be the time of the true leaders of Pakatan. Younger leaders who don’t want their families to dominate their parties, who are not singularly driven by a desire for power to take revenge on Tun Mahathir etc. and leaders who don’t have the baggage that a former Deputy President of UMNO will always surely have.

It is sad to see an otherwise intelligent man blind to the fact that he will never be Prime Minister. The destructiveness he unleashed on Kuala Lumpur this weekend is the final act of desperation of a man hoping in vain that he has still got one final act to play. What he does not realize is that his audience has left and moved on to something, or someone, that far more closely resembles an ideal of leadership with which they want to spend time and watch.

Datuk Ambiga herself conceded that the Police acted after the political segments of the rally intimidated and attacked the Police. In her own attempt to salvage what has become an irreparable situation of chaos and violence, she naively asks the Government to think about why some people would act so extremely. The motives of men smashing cars lies not in a desire for electoral reform. Rather, they were doing so because Anwar told them to do so. He told them to do so because he knew that if they rained chaos on the streets, the Police would be forced to act. Only then would his friends in the foreign media be able to dedicate many minutes of coverage to chaos in yet another Muslim majority country.

Datuk Ambiga has to take some of the responsibility despite her attempts to ask the crowd to disperse before the trouble started. She herself repeatedly requested PAS and Keadilan to bulk up her numbers in the event that ordinary non-partisan Malaysians did not show up. It is as clear as day that Bersih has been entirely taken over by the Opposition. This could have been avoided if Datuk Ambiga never started on that slippery slope of sharing the Bersih stage with Anwar in particular.

I am Chinese and the first trait of my people is pragmatism which is why we felt that there needed to be a much stronger Opposition in 2008 given the wanton corruption and abuses of the BN then. Pakatan would do well not to take my pragmatism for granted for this way of thinking does not know political loyalties. Chaos and desperation are not pragmatic. For the first time since 2008, Anwar does not seem like a pragmatic choice for Prime Minister.

Democratic progress is NOT upturned cars on the streets and vigilante rowdies running riot in our cities. Democratic progress is the setting up of a true two party system. Pakatan needs a real leader who believes in the ideals of democracy and has NEVER practiced otherwise. With this, I hereby write the beginning of the end of Anwar Ibrahim’s political career on 28 April 2012.


p.s. The foreign media were among the most frustrated by the outcome of Bersih 3, I think. They wanted to see violence against the people. They wanted Tahrih Square and Tianeman. They were hoping for police brutality (read here, Aljazeera's reporter reading from a prepared script) They did not expect images and footages like these: 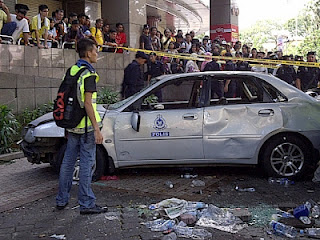 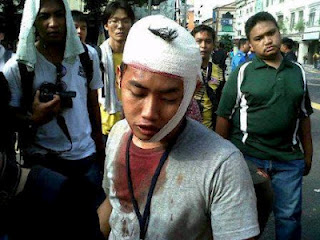 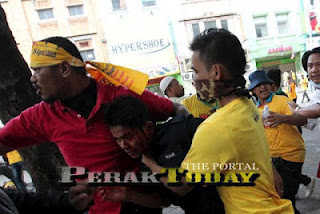 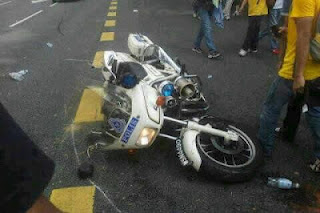 And if Aljazeera was as good as it claimed to be, it would have gotten this and proof of who started it all. The "why" we all know, unless the Aljazeera's reporter is so dumb we have to spell it out to him: