Karpal Singh is neither forgiving nor forgetting. The Malay Mail's front page today says it. 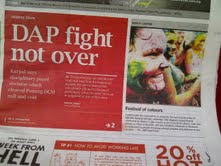 DAP's shoeshine rookie P. Ramasamy's battle with veteran Karpal Singh was a proxy fight, everybody knows. It was one that the Chief Minister of Penang, Lim Guan Eng, should have stopped before it started. But he didn't, everybody knows that also. In fact, political pundits said it was Guan Eng who set Rama up against the original "Tiger of Jelutong" but I'm not sure if everybody knows that or agrees with the theory.

If Guan Eng had tried to send veteran Karpal Singh to pasture via the Deputy CM, that act has backfired badly. And we can agree that this is going to haunt Kit Siang's son for a long, long time.

The blogs have been playing up the proxy fight. A very good reference is found on Apanama, blog entry End of Ramasamy in DAP? 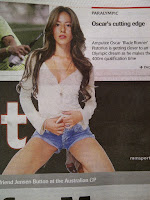 p.s Looks like the Malay Mail's "page three girls" are baaack! Except that they aren't really Page 3 girls lah. Check out the Sports Page pic on the left and more inside .. they are news photographs and quite readable, really. But dudes at the (new) Malay Mail, the KDN is not going to agree and some women will not be amused! Trust me, I know ...
at March 19, 2012