"Will 2008 repeat itself in 2012? The previous Prime Minister did not know if he was coming or going. He had a kind of deathwish. Najib appears to be much smarter and more awake than the previous fellow. I hope Najib does not have a similar deathwish. " - Syed Akbar Ali in
Lembu CEO's salary, pow-wow in London & stuff 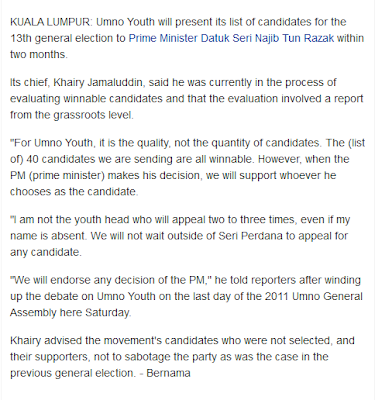 Nah, this posting isn't about Khairy Jamaluddin. Some people tell me he wants to become the Menteri Besar of Negri Sembilan, that the incumbent, Mat Hassan, has served his last term, for sure, but I tell them this is no longer what-Khairy-wants, Khairy-gets era. If Najib Razak wants to offer KJ as Negri MB that's his prerogative.
After all, it's true that nearly all, if not all, of the MBs and CMs in the states under BN have served their last terms. These YABs are likely to retire after the 13th General Election or go back to Federal. Najib Razak is also looking at potential MB candidates for Kedah and Selangor, just in case the Pakatan Rakyat loses these states in PRU13. Not sure if Mukhriz Maahthir fancies himself as MB material, but Umno stalwarts say the boss is considering the guy. [Read Umno to take over Kedah?]
It is also true, according to the stalwarts, that Najib is hoping that ALL former Cabinet ministers from BN will offer NOT to seek re-election so as to give him a chance to introduce younger, fresher candidates. So far only Idris Jusoh, the ex Terengganu MB, has said he will not see re-election.
In his latest posting Semua Parti akan janjikan calon "Winnable" [interpretation by The Mole, here], Kadir Jasin says Najib will have his list of "winable" candidates ready in a month or two. Within two months is what KJ says in the Bernama article above, too. Interestingly,
KJ also said he won't camp outside Seri Perdana if he's not picked and has asked Umno Youth members not to sabotage the party if their candidates are not chosen by the PM, which was what happened in PRU12. I hope they remember that, when the time comes.
at December 11, 2011