LATEST! KALIMULLAH HAD DINNER WITH GUAN ENG IN SINGAPORE? BIG DOG HAS THE STORY HERE.


The Mole contacted Lim Guan Eng in Surabaya just now. He declined to comment on a fresh allegation that he had badmouthed Johoreans during a recent address in Singapore. Read The Mole's story H E R E.

I tell you, if The Mole is digging, the truth will be out soon  ... 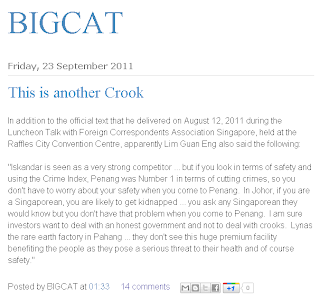 Those Disparaging Remarks. Now, I'm not sure if Lim Guan Eng had NOT badmouthed Johor during an interview with an Australian radio. In the first place, I'm not sure whether to believe that Lim Guan Eng was indeed interviewed by an Australian radio. Why would anyone want to do that? Still, the Pakatan-friendly portals have quickly carried Lim Guan Eng's denial, eg here, and there's even a transcript that allegedly proves that the Penang CM did not smear Johor as alleged by Bernama., the national news agency. Poor Yong, the Bernama's editor-in-chief, he is probably shivering as Lim Guan Eng demands his pound of flesh:


“I will give them (Bernama) reasonable time (to repent) before action is taken against them.”

While all these are taking place, the anonymous blogger BigCat has gotten in touch with me. She whispers, this new kid on the blog who wrote the short posting "This is another Crook", and she insists that Lim Guan Eng did utter those words when he was in Singapore. "Guan Eng makes LKY sound like an amateur when it comes to badmouthing Johoreans," she says.

I don't know what she will do if Guan Eng won't deny them but I suggest that all of us, Lim Guan Eng's office included, check out this BigCat blog regularly for the next day or two ...
at September 26, 2011