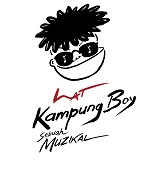 Awie, with the wig on his head, should have turned into Tom Jones and sang Burning down the house.

what is the point Latuk? Malah sama Lais lagika?

Jhr 100million defamation suit is a side track...small gamer trying to make it big .....
But lat still d best
:)

He attended the show...as a must...to show Malaysians he is "People's PM"
He did not have the courtesy to go up the stage and meet Lat....because he is suffering from shock that his planned sex movie on Anwar backfired.
He wants to go home fast and cry.

I bought every Lat book...VCD cartoon movies..from day one.
I never miss looking for his cartoons at the S.Times 30 years ago.
He is legend...yet Najib does not have the decentcy to go up and shake his hands?
What kind of "1Malaysia" PM is he?

Bru, you mean to say that Rais has that kind of power and privilege that he could stop the PM and disobeyed the wishes of the PM's office?

Wow, what audacity he has!

Thank you for highlighting this.

May not be able to catch the show. I am away in the Middle Kingdom.

Next time around Rais must be sacked!
Najib is just biding his time until the next elections and he is not going to make a move to anger anyoneor rock the boat!
As for Zarinah Anwar, itu setahun saja tak apa lah!

Gotta be Rais. No one can be that obnoxious.

Sick of reading about your never-ending hatred for Rais.

The wait has been torturing. Mr NTR should have dumped him long time ago and promote the likes of Shabery Cheek to Penerangan Komunikasi and Kebudayaan.

This man whom many called Botak1 (not to be confused with 1Malaysia or 1Botak)is treating this government office like Mr Yatim's property.

Mr Pasquale...thou shall not let down us the down-trodden lah..v know u r capable to fix this Botak1 situation....aiyah, faiti lah!!

Not Botak Chin...
And not from Kepong

Anonymous said...
Sick of reading about your never-ending hatred for Rais.

Anon,
I hate it more having to give him space on my blog. But I can't help it if people come to me complaining about his arrogance or style. I have this blog, y'see. And I checked my facts (as Lat was told to do time and time again by his mentor).

Interestingly, Datuk Ibrahim has issued a response on the Minister's behalf. Kononnya tak de masa, kata Rais. Tapi ikut cerita pihak-pihak tertentu, Menteri bagi arahan sebelum show bermula puun. Datuk Ibrahim, I am sure, would have communicated with the Protocol officer in charge of the PM that night.

some people just don't know how to fade away.

wah still shooting rais whenever u can ah? get better ammo la this piece is pathetic

Looks like Rais is Rocky shy. Wah! Now he has a high pay media advisor to answer Rocky.

Looks like Rais is Rocky shy. Wah! Now he has a high pay media advisor to spin to Rocky.

Tak pe lah Bro, Rais is on his last tour as Minister mahu tunjuk gempaq je tu. I don't think the powers that be would be impressed.

I'm rare on comments here DRBru; but my guts are sending me a message that Rayeez is being paved to the path of history in M'sian politics.