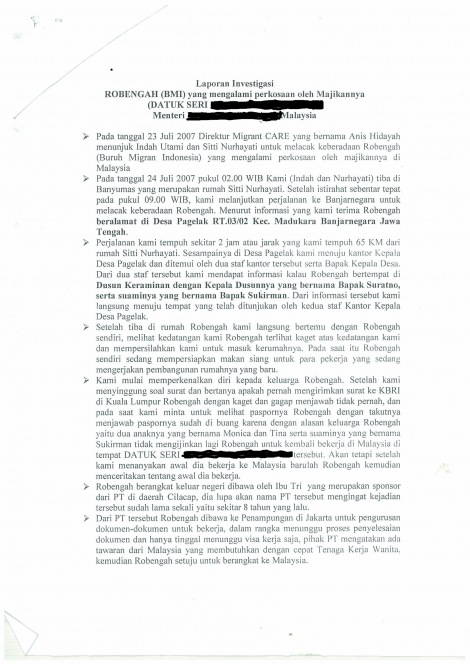 In Malaysia shit only hits the fan when the MSM begin to report. Right!!?

One other thing. I think your heading is wrong. It should not be "Please Investigate this report thoroughly"!!

It would be more accurate if it had been, "Please act on the investigation of this report"!! After all it should have been added to the list of "NFAs" isn't it? Oh, just in case you are not familiar, NFA, means no further action. Usually it ends at the AG's office. But then again on a report like this could have ended on the IGP's table as well.

Anyway, now it all begins to make sense. Why a nice guy has turned into a turd!!

i wonder how it feels like being in the middle of a burning bridge.

Fire & heat at both end. Just no where to go.

Just jump and bring along pak lah too.

Malaysian cabinet is filled with SUSPECTED murderes, rapist and bribe taking politicians.
This could well be the cabinet in India, Pakistan, Bangladesh or even Zimbabwe.
If the head is ROTTEN, what do u expect the rest to be!!!!

with love from M

As leaders we are bound to opertae within the bounds of the law and mores, more so than mortlas.

Sometimes our studies can make us proud until we think somehow our parts of our body have an indpendence exitence, and free from censure.

But a is A and is responsible for actions of his members. alla cts of violence against the integrity of aperson, be it a blogger or madisservnat, is an act of violence and thyerefore criminal, if the pain suffered by the victim is reckoned.

The minister mentioned should sue RPK if it is not true. I am waiting for his action. No action means true, lah.

If you read carefully on the documents publish in BigDog's blog, you'll find out who that Datuk Seri is....

1 thing for sure is that this so-called DATUK SERI is NOT "ANWAR IBRAHIM"!!!

Why??? Any DONKEY will know ANWAR IBRAHIM doesn't fancy FEMALES. If it's a MALE, then, lain cerita lah.

As leaders, we are bound to operate within the bounds of the law and mores, more so than mortals.

Sometimes our studies can make us proud until we think somehow parts of our body have an independent existence, and are free from censure.

But A is A and is responsible for actions of his members. All acts of violence against the integrity of a person, be it a blogger or maidservant, is an act of violence and therefore criminal, if the pain suffered by the victim is reckoned.

You are not fair at all. All your allegations are all without any evidence.

You missed out on this one, to go back into history, the Malaysian Cabinet did consist of a sodomist.

Whether they are true or not, Rais Yatim seems to be dogged by all sort of scandals. I wld hv thought after the first one, kut serik le dan pandai le be extra transparent. His ministry shld be beyond reproach. Tapi tak juga.

What further baffles me is that he's still picked to be a Minister. His peers almost all dah pencen. Macam tak ada orang lain ke ....

Not the right time!It must be done in 2007.To expose it before or give ammo to help The Opposition,is not a wise move.

Sad to say to all pro-UMNO bloggers, just be patient!Crime or no crime,not a shit to them.1Malaysia is their biggest fear now.

WHAT IS THE ATTITUDE OF PR COMPONENT PARTIES TO GAY KING ANVAR IBRA EHEM??

Kian Ye said I'm sure it is not Anwar:

I'm sure you, Kian Ye, is talking from your own experience. How was his dick and did both of you have a nice time?

I would suggest by 56 (takpa extend 2more years), siPolan2 yang gemar makan keladi, should be pensioned off..

Technology is going ahead at a fast pace... google/facebook bringging new changes for all, ilham pemikiran darah muda2 with VISIONS for their future..

Is is possible in this case? I must be dreaming if it does....

This is how a rape by the President of Israel was reported in The Star today:

TEL AVIV (Reuters) - Former Israeli President Moshe Katsav was found guilty of rape and other sex crimes on Thursday, in what Prime Minister Benjamin Netanyahu called a sad day for the Jewish state."

Now, this rape by a Malaysian senior minister has so far been covered. When shit does hit the fan, I wonder if that earlier text can be used. Maybe not! It would be more accurate to say, Malaysia and the UMNO led government have been seriously compromised, scandalised and embarrassed. Sad? Maybe not!!

Pak Lah should know better. He is supposed to be a Pak Lebai as well amongst his close friends and relatives. He can now be equated to "bersebahat" in Islam. He should come clean for once. As for the penjenayah, just claim momentary loss of iman during the act and astaghafar banyak2.